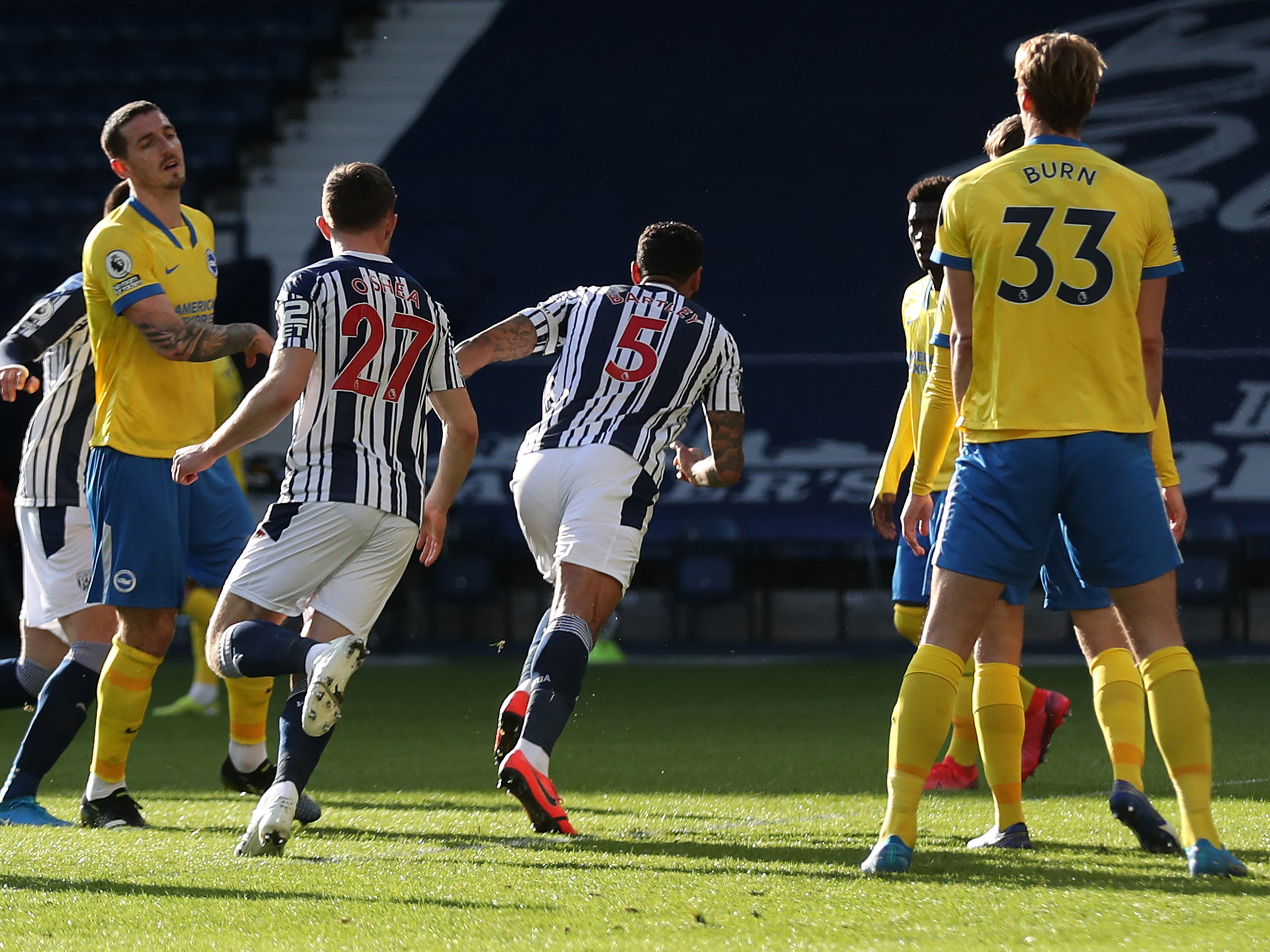 The perfect start to a big week at The Hawthorns.

All the pre-match chat revolved around the need for Sam Allardyce’s Albion to build on recent impressive performances against Manchester United and Burnley by picking up three points against Brighton, and they did just that.

It’s fair to say it was quite an eventful afternoon in B71. Penalties, VAR decisions, disallowed goals and lady luck playing her part. Plenty to keep us all gripped. But the only thing which mattered come 5pm was the final score, and Kyle Bartley’s first-half header ensured it was the Baggies who were celebrating a much-needed and morale-boosting victory going into two more home matches against Everton and Newcastle later this week.

How about that cross from Conor Gallagher for the only goal of the game?! Talk about putting it on a plate for the skipper. Kyle Bartley rose highest to meet the midfielder’s inswinging delivery from the left after just 11 minutes to give the Baggies the dream start at The Hawthorns.

Albion have some serious aerial threat with the likes of Bartley, Ajayi, O’Shea, Furlong, Yokuslu and Diagne all capable of capitalising from set-piece situations if the crosses into dangerous areas are executed to perfection. Gallagher certainly came up with the goods on Saturday. The combination of the on-loan Chelsea man and Brazilian boy Matheus Pereira standing over dead balls is sure to create further opportunities for Allardyce’s side to cash in with goals from now until the end of the season.

You’d be hard pushed to find a blade of grass untouched by the boots of either Conor Gallagher or Ainsley Maitland-Niles on Saturday. They were absolutely everywhere against the Seagulls, pressing high at the right moments with a tenacious intensity, preventing the visitors making early forward passes and harassing them into unforced errors in possession.

With Turkey international Okay Yokuslu anchoring behind them, the duo were given the freedom to go and hunt the ball down for Albion. Gallagher and Maitland-Niles made life extremely difficult for Brighton players all over the pitch, winning the ball back high up leading to chances, as well as further back towards their own goal to help out the defenders when needed. Gallagher covered 11,331 metres, while partner Maitland-Niles ran 10,727 metres. The pair’s energy and exuberance in the middle will certainly aid Albion’s survival bid.

There are moments in football when the skipper needs to stand up and be counted. When that individual needs to make it clear just why they wear the armband. There was a moment of such importance on Saturday afternoon, one which would’ve lifted a packed Hawthorns to its feet in admiration.

With time ticking towards 90 minutes, and with Brighton applying more and more pressure in search of an equaliser, Kyle Bartley courageously flew out to make one of the best tackles you’re likely to see in the Premier League this season to deny Seagulls sub Jakub Moder a clear goalscoring opportunity. If the tackle itself wasn’t good enough, how about Barts’ reaction? Up to his feet in a flash and a passionate fist pump you’d expect to see from a player who had just bagged the winner in a cup final. That’s how much it means to Kyle and it’s commitment like that which will be required from now until the end of the campaign.

A more than Okay display from Okay

Another game. Another terrific performance from Okay Yokuslu. The 26-year-old made his third start and fourth appearance in an Albion shirt since his January loan switch from La Liga side Celta Vigo. Saturday’s display, just like his previous showings, was full of confidence, class and composure. It was a performance which earned him the Man of the Match award, as voted for by Albion supporters on Twitter.

His standout moment? Look no further than well into the second 45, winning the ball back on the edge of his own penalty area, dancing past three Brighton players with a few stepovers thrown in, driving up towards the halfway line and sliding a perfectly-timed pass behind Dan Burn into the path of Matheus Pereira. Brilliant.

Your #WBABHA man of the match 🤩

Another fantastic display by @Okayokuslu at The Hawthorns on Saturday. pic.twitter.com/QOflwnvlUu

Let’s be honest. Lady luck was certainly favouring one Albion on Saturday afternoon. And it wasn’t those wearing yellow reaping the rewards of her generosity. For the first time ever in a Premier League game, a team missed two penalties in a single game by hitting both the crossbar and the post. Pascal Gross and Danny Welbeck both guilty of failing to convert from the spot.

But we shouldn’t forget the contribution Sam Johnstone made to securing a big victory on Saturday. Not for the first time this season, Sam made a number of important saves to keep Brighton at bay and nail down a second consecutive Premier League shutout. Aaron Connolly, Lewis Dunk, Leandro Trossard and Joel Veltman all saw efforts stopped by our No.1. They say you need a little bit of luck in football. But they also say you need quality. Sam’s quality in undeniable, and if lady luck wishes to carry on being favourable to us, there’ll certainly be no complaints here.