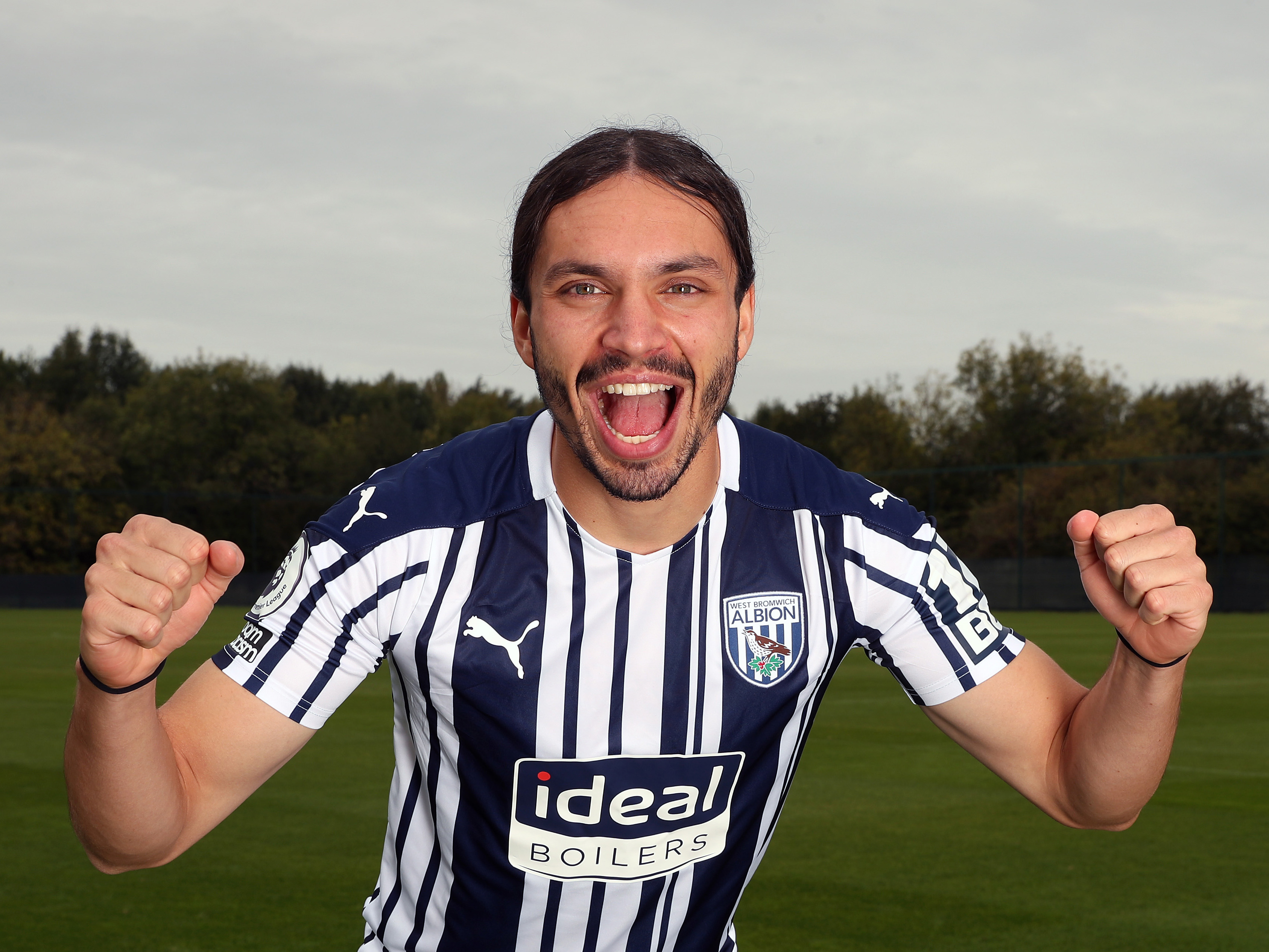 Filip Krovinović came off the bench to make his 50th West Bromwich Albion appearance on Saturday night in our win over Sheffield United.

The Croatian midfielder, who is spending his second consecutive season on loan with the Baggies from Benfica, has become a popular figure among the supporters and his team-mates at The Hawthorns.

So to mark Filip’s milestone, we thought we would take a look back at some of the key moments, matches and numbers during his time at Albion.

Filip’s eagerly-anticipated Albion debut came on the opening day of the Sky Bet Championship campaign at Nottingham Forest. Baggies fans were excited to see what the creative Croatian could offer, and they didn’t have to wait long to see what Krovinović was all about. Slaven Bilić handed him a start at the City Ground, tucked in behind central striker Ken Zohore in the No.10 pocket. Krovinovic looked composed, calm and confident, playing the full 90 minutes as Albion secured a 2-1 victory. The perfect start.

Albion’s second game of the season and their first at home. Filip’s first competitive appearance at The Hawthorns. After impressing at Forest a week earlier, he was once again named in the starting XI. Krovinović delivered another eye-catching display. The midfielder won the free-kick which led to Kyle Bartley’s opening goal, but the Baggies were unable to hang on and were pegged back by the Lions as the game finished 1-1.

Krovinović’s first assist for the Baggies

Filip’s first goal involvement came just four games in on a blisteringly hot day at Kenilworth Road. The Baggies were trailing 1-0 at half-time, but shortly after the restart they came to life and Filip played a key role in both goals. His quick feet and precise pass into the path of Grady Diangana led to the winger shifting the ball to his left foot and rifling home an equaliser. And it was the same combination, via the help of a slight deflection on Krovi’s shot, which resulted in the winning goal. Diangana dived in at the back post to convert Filip’s diverted strike and the Baggies had three precious points in the bag.

A late Christmas present! Filip bagged his first Baggies goal at Barnsley on Boxing Day and it came just five minutes into the game. The Croatian picked up a loose clearance by Barnsley stopper Samuel Radlinger and lofted the ball straight back over his head from 25 yards. Quite the way to open your account. Sadly though, with seconds left on the clock, the hosts equalised to steal a share of the spoils and deny Filip the glory of a winning goal.

Man of the Match performance in the FA Cup

Having not featured for just under a month, Krovinović was given a start as Albion took on Premier League West Ham United in the fourth round of the Emirates FA Cup. His performance that afternoon in front of just under 5,000 travelling Baggies was nothing short of outstanding. It was a showing full of energy, quality and determination. Filip took home the Man of the Match award in a game which saw Albion claim an impressive 1-0 victory thanks to Conor Townsend’s first goal for the club. His display at the London Stadium helped cement his place back in the starting XI for the majority of the remainder of the Sky Bet Championship campaign, and proved to be the catalyst for a series of eye-catching performances in the middle of the park.

Storm Ciara no match for Filip and Albion

Millwall away in February 2020. Albion fans will be talking about this one for years and years. Treacherous conditions. Wind and rain many will have never experienced either playing, or watching, the beautiful game in. At one point in the first half it took Filip and his best mate Matheus Pereira over 90 seconds to take a corner kick because the ball wouldn’t stay in quadrant due to fierce winds. But Storm Ciara’s ruthlessness was no match for Albion and Krovinović as they surged to what felt like a huge victory in the capital. Arguably one of his best performances in and Albion shirt, the Croatian opened the scoring with a curling effort from the edge of area moments before the break. Dara O’Shea headed home his first Albion goal in the second-half to seal the win. An afternoon which will live long in the memory, with Filip’s super strike one of the stand-out moments on a remarkable Sunday afternoon at The Den.

Those special full-time scenes down at the Gate

Albion stormed to a thumping 3-0 victory at play-off chasing Bristol City thanks to a Hal Robson-Kanu double and a Callum Robinson goal in late February. A huge win in the context of the season. A victory which extended our healthy lead over the chasing pack. The finish line was very much in sight. Cue jubilation in the away end and celebratory scenes from the players in front of the travelling Baggies after the final whistle. At the forefront? Filip Krovinović. His love for the club and his team-mates? Undeniable. He was enjoying every single moment. Dancing, singing and hugging every single team-mate. An occasion for his energetic and playful character to shine, and boy did it shine.

Impact sub in the FA Cup

Filip was brought on after 57 minutes with Albion trailing 3-0 at home to Premier League Newcastle United in the fifth round of the Emirates FA Cup. First-half goals from Miguel Almiron and a third added two minutes after half-time by Valentino Lazaro had the visitors in complete control at The Hawthorns. Something had to change. That change was Mr. Krovinović. Everything went through him. Albion suddenly looked a real threat, with Filip at the heart of the attacks. Matty Phillips made it 3-1 before Ken Zohore brought the scoreline to within one goal in the final few minutes. Another ten, and who knows what might have happened that night. A positive impact from the Croatian on a night where Albion ran the Premier League outfit very close.

A crucial goal at Ewood Park

Filip’s third goal of the 2019/20 Sky Bet Championship campaign came at Ewood Park in the middle of July. His side-footed finish from inside the penalty area put Albion 1-0 up against Blackburn Rovers in a tense end-of-season encounter. Joe Rothwell equalised in the second 45 but the point the Baggies picked up that afternoon proved to be a crucial one in the race for Premier League promotion.

Promotion to the Premier League

What. A. Night. Promotion back to the Premier League secured after a 2-2 draw with QPR in B71. Grady Diangana and Callum Robinson the goalscorers in a game which Filip played the full, nerve-wracking 90 minutes. Once again, the Croatian was right in the middle of all the celebratory scenes at full-time as the Baggies toasted a successful season in the Sky Bet Championship.

A moment so many dream of. A Premier League debut. Krovinović appeared in England’s elite division for the first time in early October as Albion slipped to a 2-0 defeat at Southampton. Filip came on in the 64th minute – just days after re-joining on loan from Benfica for a second successive season-long loan. A moment he’ll never forget on an otherwise disappointing day for the Baggies.

Filip’s first Premier League start came against Burnley at The Hawthorns. The Croatian completed 79 minutes before being replaced by Romaine Sawyers. The Baggies went close on a number of occasions but were unable to find a way through a resolute Clarets back four and the game ended goalless.

50 games up for the Albion

Krovinović’s 50th and most recent appearance for the Baggies came against the Blades as Slaven Bilić’s side claimed their first Premier League win of the season. Midfield partner Conor Gallagher scored the only goal of the game, with Filip being introduced to action after 75 minutes.