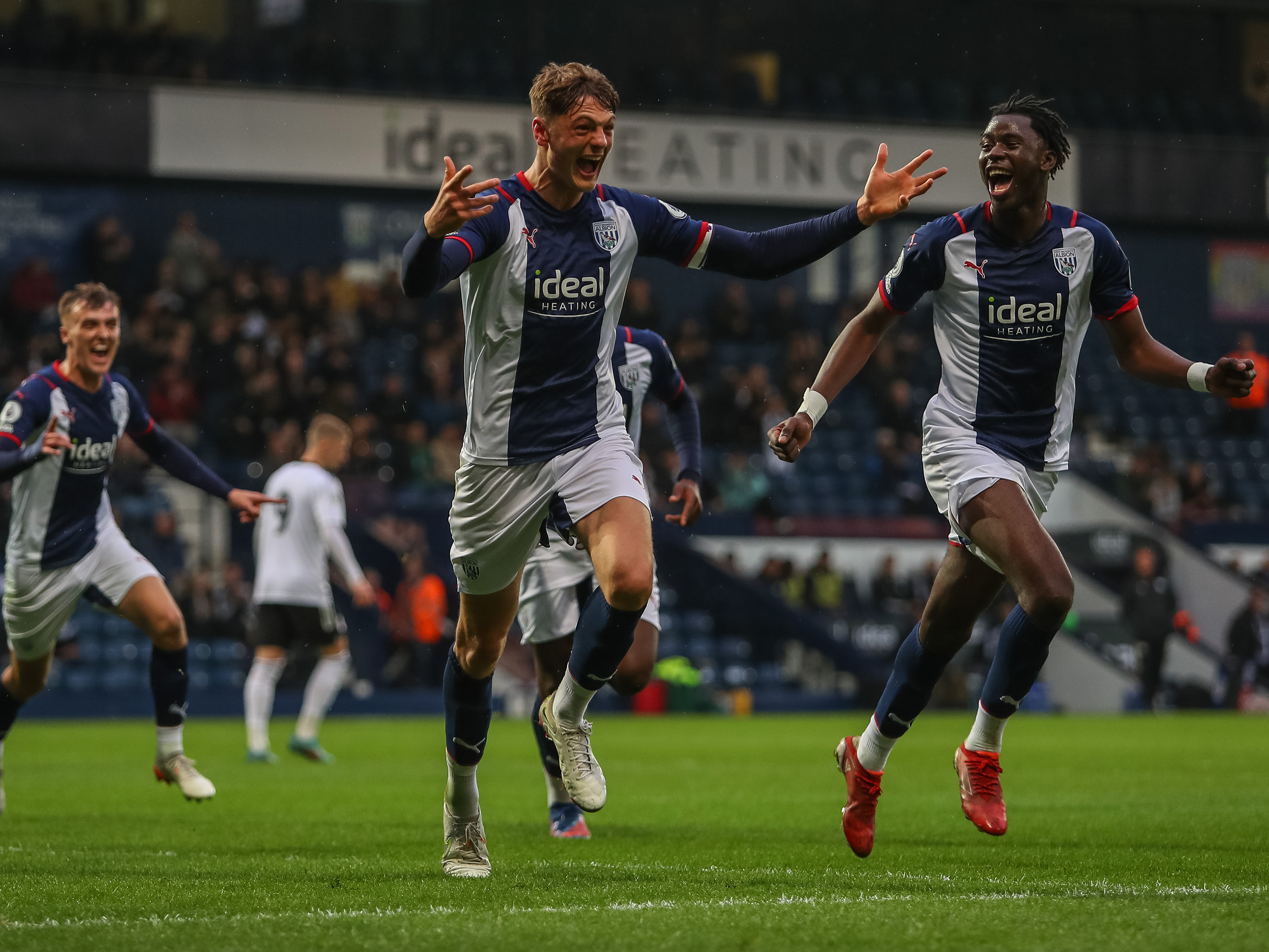 Albion’s youngsters have produced a number of memorable performances to reach the pinnacle of the Premier League Cup this season.

Following a successful goal-laden group stage, Richard Beale’s men have shown plenty of character during the knockout stages of the competition.

Take a look back at their journey in this year’s tournament, including all the strikes which helped power them to Friday's PL Cup Final against Wolves.

Albion began their cup run with a comfortable win against AFC Bournemouth’s youngsters at The New Bucks Head. After spurning a first-half spot-kick, forward Owen Windsor prodded the game’s opening goal in from close range to ensure the hosts led at the interval. And after weathering a Bournemouth storm during the second 45, Rico Richards chipped home a late second and ensure the Baggies made the perfect start.

There was no messing about from Richard Beale’s men during their next group game, as they took full advantage against a young Southampton team. Rico Richards gave Albion an early lead with his second consecutive goal in the competition, before Quevin Castro produced a moment of brilliance - curling in a fine free-kick to put the young Baggies in the ascendancy at half-time. Jamie Andrews added a third from the spot and substitute Mo Faal bagged a quick-fire brace, either side of Owen Windsor's brilliant volleyed finish, to put the shine on a dominant display against their south coast counterparts.

Confidence was high going into Albion’s third game in the PL Cup, and it reflected on the night as they saw off a talented Arsenal side in the capital. The Gunners, clearly trying to replicate the style set by Mikel Arteta’s first team, played right into the visitors’ hands. Tom Fellows broke the deadlock with a smart turn and low finish, Reyes Cleary finished off a lovely team move, and Rayhaan Tulloch neatly tucked away a third as the Baggies raced into a healthy lead at the break. Kevin Joshua’s towering header put Beale’s side out of sight in the second half, with Khayon Edwards’ late strike proving to be a mere consolation for the hosts as Albion extended their lead at the top of Group A.

After gaining early momentum in their cup run, Albion were dealt a blow in their bid for early qualification to the knockout stages by falling to a heavy defeat against the Cherries. In front of a noisy crowd at the Vitality Stadium a much-changed Baggies team - which featured a number of the club’s Under-18s players - couldn’t keep a fast-flowing Bournemouth side at bay. Despite a number of fine saves from promising Wales youth international Ronnie Hollingshead, the hosts eased to victory courtesy of efforts from Zeno Rossi, Christian Saydee and a second-half brace from Euan Pollock.

Albion maintained their push thanks to a fighting second-half display helped them twice come from behind to draw with Southampton on home soil. Ramello Mitchell’s finish from a tight angle had given Saints a first-half lead, but Dynel Simeu’s red card during the early minutes of the second 45 helped the Baggies fight back. Jamie Andrews duly converted his spot-kick to level proceedings and although Kazeem Olaigbe put the 10 men instantly back ahead with a fine volley, Reyes Cleary was alive to smash in another equaliser from a matter of yards to keep Beale’s side top of Group A.

The Baggies cemented their place in the last 16 of the PL Cup with another 4-1 win over Arsenal at the New Bucks Head. Rico Richards netted early to reward the home side's dominant showing and, although they failed to build on it during the first period, there was no holding back after half time. Reyes Cleary forced home a second after good work from Ethan Ingram and despite Omari Hutchinson’s response for the visitors, Zac Ashworth’s contributions helped see out the game. The Wales U21 international won a penalty which regular taker Jamie Andrews confidently converted, before the left wing-back sent a long ball into substitute Mo Faal, who lobbed Gunners keeper Hubert Graczyk to round off an impressive group stage for Albion.

There was plenty of spirit on show as Albion overcame a physical Queens Park Rangers side to reach the last eight of the tournament. Reyes Cleary smashed in the game’s first goal during the opening 10 minutes. Sinclair Armstrong then forced home an equaliser for the Hoops, capitalising on a defensive lapse, but Cleary would ensure the home side led at the break by curling an effort beyond the reach of Harry Halwax. Both sides created several chances on the night and such was the back-and-forth nature of the tie, the visitors rallied again when Armstrong netted his second. However, it wouldn’t stay level for long and neat work between Quevin Castro, Cleary and Tom Fellows allowed the latter to burst into the visitors’ box to slide an inviting ball across the face for Rico Richards to score. But there was still time for the icing on the cake, as Cianole Nguepissi looped in his first goal since joining the club to ease Beale’s boys into the quarter-finals.

The Baggies secured their semi-final spot with an excellent win in a seven-goal thriller at Pride Park. Derby raced into the lead but stunning long-rangers from duo Jamie Andrews and Jovan Malcolm put the visitors into the lead. The Rams equalised on the stroke of half-time and then missed a penalty, a spurned opportunity they would regret. Defender Zac Ashworth bagged two goals in two minutes in the middle of the second 45 and although County pulled one back late on, it was Albion who booked their place in the last four.

Albion’s youngsters made history by reaching the final of the PL Cup for the very first time with an impressive 2-1 victory over Fulham. The club’s promising stars applied plenty of early pressure and took the lead at The Hawthorns when towering centre-back Caleb Taylor powered in a header from Taylor Gardner-Hickman’s corner. The Baggies added a deserved second shortly after the interval through Mo Faal’s looping header following great work from Ethan Ingram down the right. Fulham got themselves on the scoresheet but it proved to be nothing more than a consolation strike as Albion set up a spicy showdown with local rivals Wolves for the trophy.