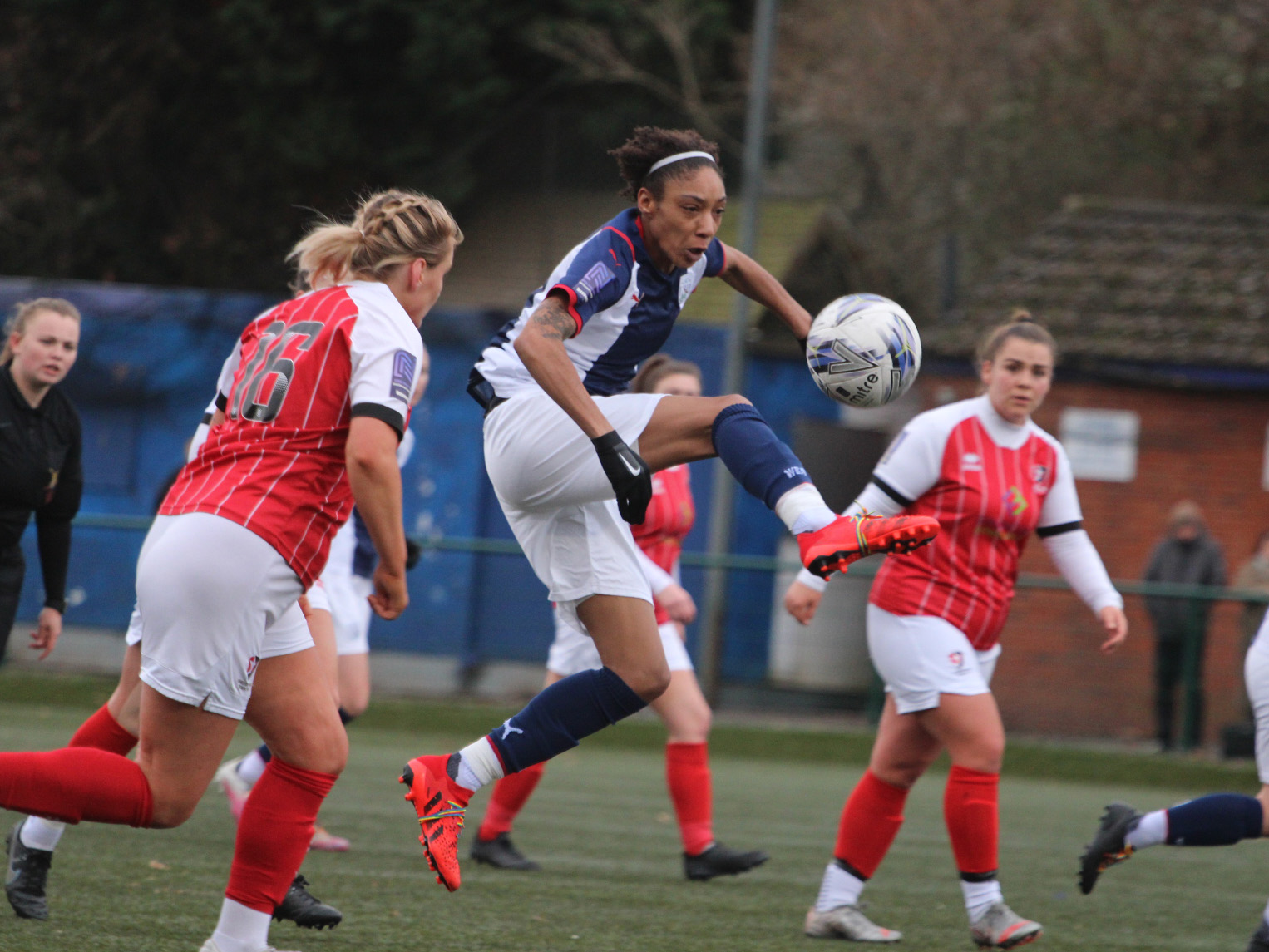 Albion Women bowed out of the FAWNL Plate Cup 5-4 on penalties after a long afternoon at a wintry Coles Lane.

The game against Cheltenham marked the team’s fifth consecutive cup tie across three different competitions, which had seen the squad net 23 times in the previous four matches.

Jenny Sugarman named two changes to the side that won 4-1 in last week’s Vitality FA Cup match, with Mariam Mahmood and Jess Davies coming into the starting XI.

The Baggies began brightly - Mahmood crashing a shot against the crossbar in the opening five minutes of the clash.

The hosts were enjoying lots of early pressure and possession, Trina Greaves also going close on 20 minutes when she headed over.

Captain Hannah George was next to test the Cheltenham goalkeeper, forcing her into a strong save to deny an effort from the edge of the area. Leanne Robinson fired off-target shortly after with a spectacular overhead kick.

Another acrobatic effort, this time by Trina Greaves, skimmed the top of the woodwork as half-time approached, the teams going in goalless following a resolute defensive Cheltenham display.

The second period started in a similar fashion to the first, Albion enjoying lots of the ball and Mahmood hitting a good chance straight at the excellent goalkeeper Aimee Watson.

Sugarman began to ring the changes on the hour-mark in a bid to find the breakthrough - Leanne Robinson and Leigh Dugmore coming on. Emma Congrave then thought she had put the Baggies ahead, only to see the goal ruled out for offside.

In the final stages Albion really cranked up the pace and intensity as Cheltenham were pinned back under heavy pressure. Rosie Embley’s shot was well blocked and Shannon Stamps smashed the bar.

The goal did eventually come, though, when substitute Dugmore converted a superb cross and the Baggies were finally in front. They now had ten minutes to hold on.

But the visitors went searching for an equaliser and deep into stoppage time were awarded a free-kick wide of the box. A great ball was whipped in and headed home to send the game into extra time. It was harsh on Albion, who had ultimately been punished for not taking their chances.

The added 30 minutes was a cagey affair. Sugarman’s side could have won it in the second half of extra time as subs Jannelle Straker and Kerry Walklett both had decent opportunities to clinch the victory before it went to the lottery of penalties.

Sadly it wasn’t to be Albion’s day as they missed two spot kicks to lose 5-4 and exit the competition.

“We are obviously disappointed as we would be in any game to lose, but I thought the effort was there from minute one,” said Sugarman.

“We switched off for a split second and it cost us the game in normal time. We couldn’t find our feet in extra time and the lottery of the shootout didn’t fall in our favour. We have been on a great run of form recently and we can’t let this setback be anything more than a disappointment.“

Albion Women are back in cup action again on Sunday, December 12 when they take on Long Eaton United in the Vitality FA Cup Third Round (1pm KO). A win will see them into the fourth round, where the likes of Chelsea, Arsenal, Manchester United enter.