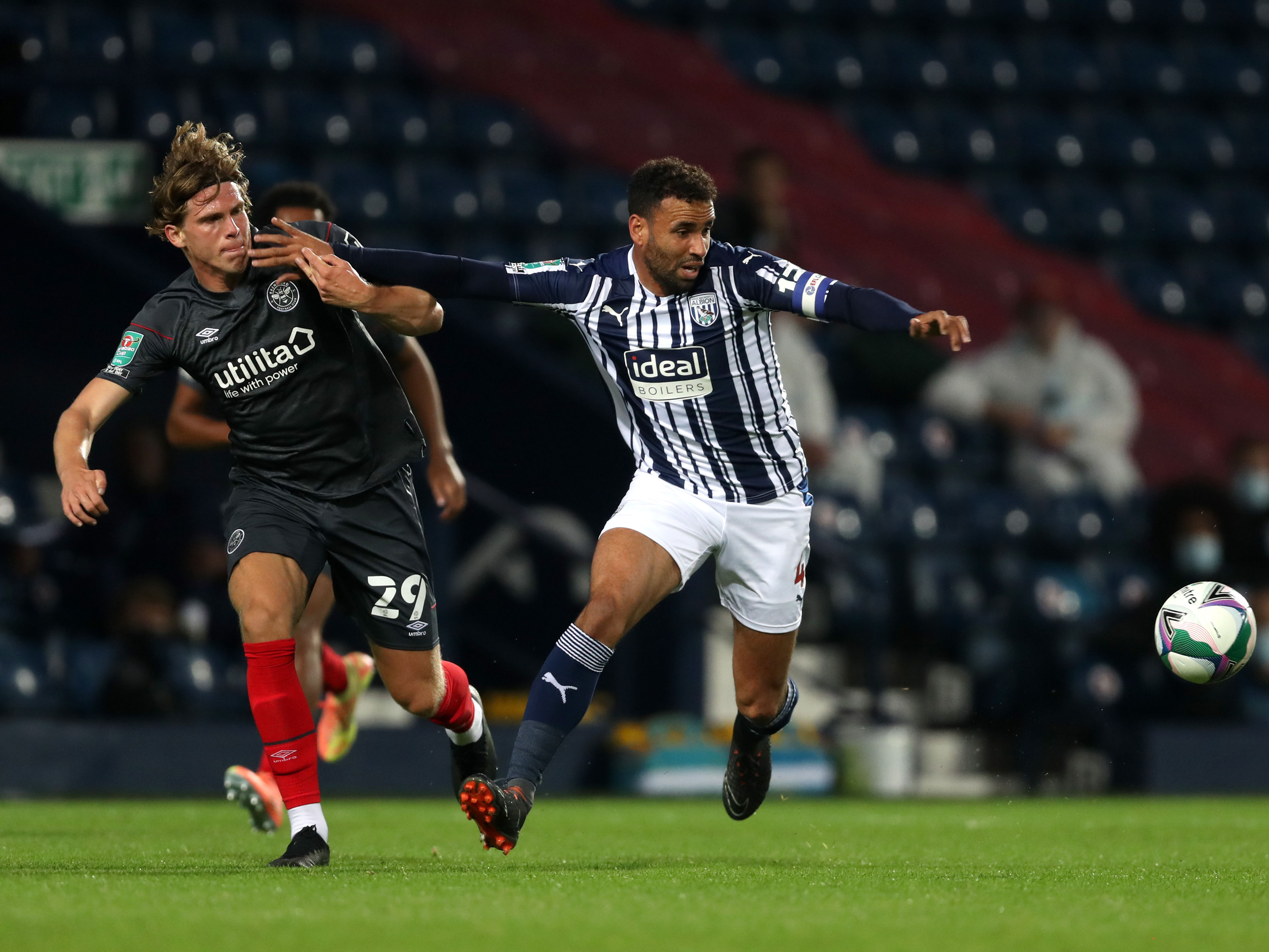 Albion bowed out of the Carabao Cup on penalties after an action-packed 2-2 draw in 90 minutes at The Hawthorns.

Grady Diangana missed his spot-kick with the score at 4-4 in the shootout, leaving Christian Norgaard with the opportunity to send the Bees through – an opportunity which he didn’t let pass by.

The third-round tie saw three penalties in normal time with Hal Robson-Kanu converting twice for the Baggies and Marcus Forss firing home for the visitors in a game which also saw Emiliano Marcondes score a spectacular bicycle kick.

New signings Branislav Ivanović and Conor Gallagher both gained valuable minutes on their debuts, with the Serbian defender playing the best part of an hour and Gallagher completing the full game.

Both sides made a bright and energetic start at The Hawthorns. Gallagher fired over from inside the area with his first touch in an Albion shirt after 90 seconds having met a Matt Phillips cross from the right.

The Bees came close on three separate occasions in the opening ten minutes. Tariqe Fosu-Henry’s teasing ball across the six-yard box was put behind for a corner, while right-back Rico Henry and midfielder Sergi Canos saw efforts from range fly high and wide respectively of David Button’s goal.

Slaven Bilić’s men were quick to respond though. Rekeem Harper, who scored with a sublime strike against Harrogate in round two, saw an attempt from outside the penalty area deflect behind before midfield partner Gallagher forced Raya into a save with a shot from 20 yards.

The visitors then came close to opening the scoring after 21 minutes when Emiliano Marcondes’ shot cannoned back off Button's near post with the ball falling at the feet of Fosu-Henry.

Lee Peltier was quick to close Brentford’s number 24 down, blocking his shot from inside the box to prevent Thomas Frank’s team taking the lead.

The final meaningful attack of the first 45 saw the Baggies win a free-kick on the edge of the penalty area. Left-back Conor Townsend stepped up to whip it towards the near post from the right, but his strike fizzed over the top of the bar.

But Albion didn’t have to wait much longer to get their noses in front following the restart. Dominic Thompson brought down Robson-Kanu in the area after 10 second-half minutes and the striker calmly rolled the resulting penalty past Raya.

But the Bees made a terrific recovery and equalised just moments later. Charlie Goode kept a deep cross alive by nodding it back into the middle of the penalty area where Marcondes unleashed a spectacular bicycle kick which clipped the bar before nestling in the back of Button’s net.

Phillips then tried to fire the Baggies back in front but his drive from 25 yards was straight at the Brentford stopper Raya.

Albion maintained their push for second goal and their efforts were rewarded 66 minutes in. Kyle Edwards was tripped in the box by Goode and Robson-Kanu slotted home an almost identical penalty to his first ten minutes earlier.

But once again the Bees bounced back. Referee Darren England awarded the third penalty of the night when Cédric Kipré was adjudged to have brought down former Baggies Academy forward Marcus Forss. Forss picked himself up and fired the spot-kick right down the middle to make it 2-2.

The final 15 minutes were frantic as both Albion and Brentford desperately tried to find a winning goal at The Hawthorns.

Gallagher had two chances in the space of three minutes. The on-loan Chelsea man couldn’t keep a strike from inside the penalty area down after meeting Edwards’ nod back, before seeing Raya reach his rasping drive from 20 yards out.

At the other end, Fosu-Henry’s tenacious strike from a central position 30 yards from goal whistled narrowly wide of Button’s right post, while Mads Bech Sorensen connected with Norgaard’s corner only to see Button push it over with a fine finger-tip save in the 90th minute.

Neither side could find a third goal and it went straight to penalties.

After eight perfect penalties and the score at 4-4, substitute Grady Diangana saw his spot-kick saved by Raya. Norgaard then stepped up and fired past Button to send the Bees through to the fourth round.