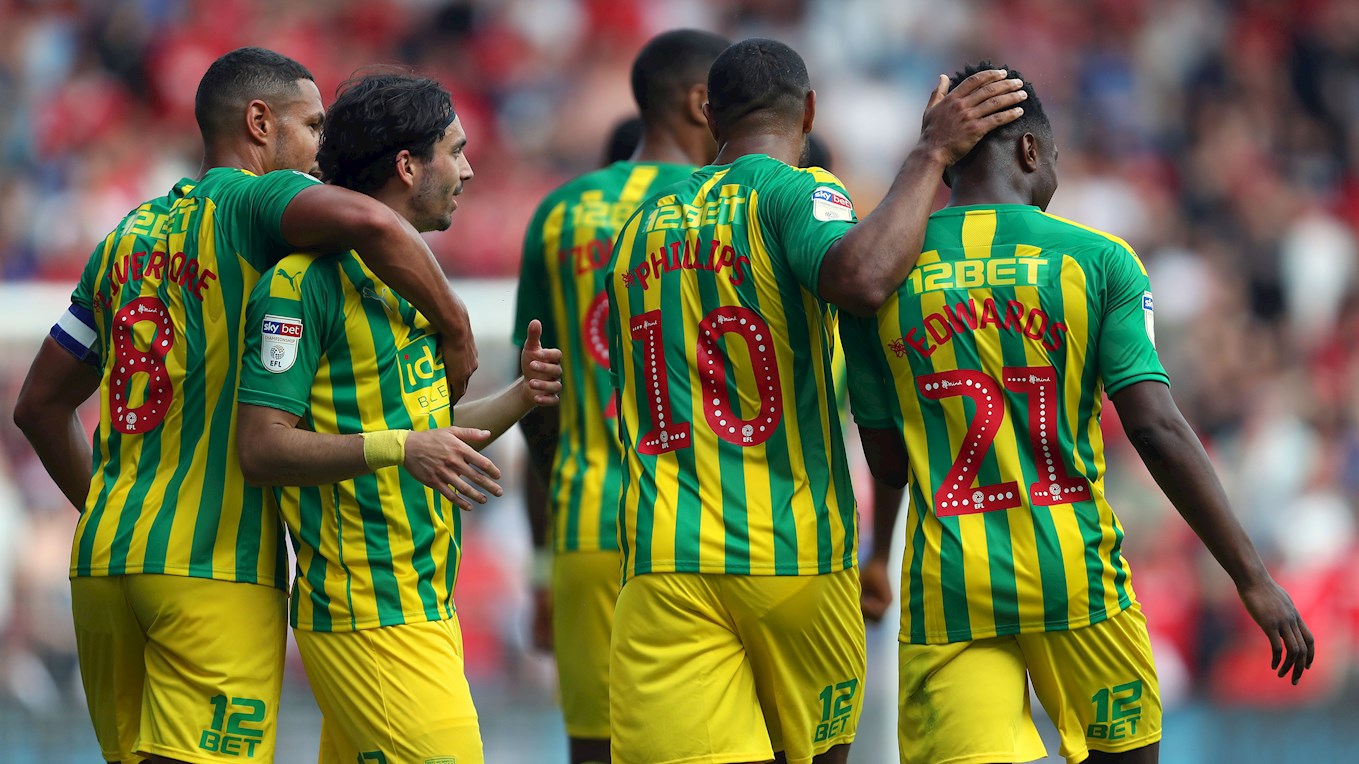 The Baggies are back!

Well, almost. We're now just days away from the Sky Bet Championship restart with Albion preparing for Saturday's clash with Birmingham City at The Hawthorns.

It's been over three months since Slaven's side were last in action. Saturday, March 7 versus Swansea City to be exact. The point gained at the Liberty Stadium was Albion's 70th in total so far this season.

Ahead of our game against Blues at the weekend, we've picked out five memorable games from the 2019/20 campaign so far to whet the appetite for the run-in.

The start of the Slaven Bilić era. The Croatian’s first competitive game in charge of the Baggies looked about as tough as they come on paper. Away from home against a Forest side with their sights firmly set on ending their 20-year exodus from the Premier League.

Slaven named five debutants in his starting XI. It didn’t get off to the best of starts on what was a blisteringly hot day along the banks of the Trent. Matty Cash fired in from outside the area in under 10 minutes. But Albion fought back. Kyle Edwards weaved his way in and out before slotting it through the arms of Arijanet Muric.

And then came probably the strangest goal the Baggies have scored this season. Matty Phillips looped the ball over the top of the stranded stopper from all of 35 yards and just a yard or so away from the right touchline. Was it a cross? Was it a shot? Did he mean it? Who cares. Albion were 2-1 ahead at half-time. An entertaining second 45 followed with no further goals. An impressive win on the opening day and a super start for Super Slav.

There’s nothing like an early Christmas present, right? Albion’s thumping victory over Swansea back in December is undoubtedly one of their best performances of the season so far. Five goals and five different scorers on a day where Slaven’s side produced a thrilling, classy and ruthless display against a promotion rival in front of the Sky Sports cameras.

Semi Ajayi powered home a header after 25 minutes before the Brazilian boy Matheus Pereira expertly converted a clever cut-back from Kieran Gibbs. Swansea pulled a scrappy goal back through Sam Surridge but Hal Robson-Kanu made sure the Baggies would go in at half-time with a two-goal lead having slotted a third past Freddie Woodman.

And there was more to come after the break. More magic from Matheus Pereira led to Matty Phillips heading in a fourth. Just a few minutes later Kyle Edwards hammered home from inside the penalty area to put the seal on a splendid winter's afternoon's work.

Derby day. Freezing cold. And we mean freezing. Swirling winds. St. Andrew’s. Birmingham City. Just reading that automatically makes you wonder if a team has the mental strength to come through a test like that. Let’s not forget just days earlier the Baggies had been held to a frustrating draw at Wigan Athletic. Everyone had witnessed the free-flowing, exciting West Bromwich Albion countless times already by now. Could Slaven’s side show steeliness, grit and determination to come away with what would be three huge points?

Lukas Jutkiewicz’s header after just three minutes gave Blues the lead, but Grady Diangana levelled things up less than ten minutes later. Harlee Dean restored Birmingham’s lead in no time after the restart. The boss made a change. On came Charlie Austin. Three minutes later, he’s absolutely buried one in the top corner from the edge of the box. Game on.

With less than ten left on the clock, Darnell Furlong darts into space on the right, deep inside Blues’ half. Austin peels away towards the back post and is picked out perfectly by the right-back. He was never going to miss. Incredible scenes behind the goal as 3,000 Baggies celebrate. Bostin’ from Austin. Brilliant from the Baggies. A day to remember for the travelling Albion army. Can West Bromwich Albion mix it up and win in tough conditions? Point people towards this day for the answer.

Storm Ciara. A very unwelcome guest at The Den as Albion prepared to take on play-off chasing Millwall in early February. Sweeping rain, roaring winds and a pitch, through no fault of its own or the Millwall groundstaff, which was struggling to cope with the sheer volume of water. It was hard to see the game going ahead. In the Premier League, Manchester City’s clash with West Ham United was called off due to the adverse conditions. The match looked in serious doubt. Thankfully, conditions slightly improved and the green light was given. Game on.

The Baggies started brightly. Matheus Pereira hit the post early on. Slaven’s side were creating chances but they hadn’t yet found the breakthrough. Step up Filip Krovinović. The creative Croatian curled in a cracker from the edge of the box to put his side one up moments before the break. With six minutes left on the clock, Albion looked in control but they knew a second goal would secure the points. Debutant Kamil Grosicki delivered a pinpoint corner onto the head of Dara the Dubliner who managed to squeeze the ball in at the near post. O’Shea’s first senior goal. And what an important one too.

Another tremendous away victory with grit and determination playing a major factor. Heard that before? A clean sheet for Sam Johnstone and the back four. “Clean” wouldn’t be the word the kitman would have used to describe this particular away day. Millwall and Storm Ciara nil. West Bromwich Albion two.

Now this was a statement victory. The Baggies travelled to the South West towards the end of February having taken 10 points from the 12 on offer earlier in the month. Only a last-minute equaliser from Nottingham Forest’s Matty Cash prevented them from heading to Ashton Gate with a 100% record in February. Form was very much on their side. However, like Forest, Bristol City had their own promotion aspirations and sat just outside the play-offs ahead of kick-off. It was a challenge where Albion knew they would have to be at their best. And boy, were they.

From the very first minute they controlled the game, created chances, looked assured at the back and oozed class. This was the Baggies at their brilliant best. Callum Robinson opened the scoring shortly after the half-hour mark and Hal Robson-Kanu then tapped in a second four minutes later. The hosts were struggling to deal with Albion’s dynamic approach. Romaine Sawyers’ red card deep into the second 45 did little to deter Slaven’s side's surge towards another big victory and crucial three points. If anything, Romaine’s dismissal spurred them on to go and grab a third.

A mistake at the back from Ashley Williams presented Robson-Kanu with an opportunity to double his tally. It was an opportunity he wasn’t about to pass up. His stinging first-time strike whistled past Dan Bentley into the far corner, sending yet another sold-out away end into raptures. A special victory. A very special performance.