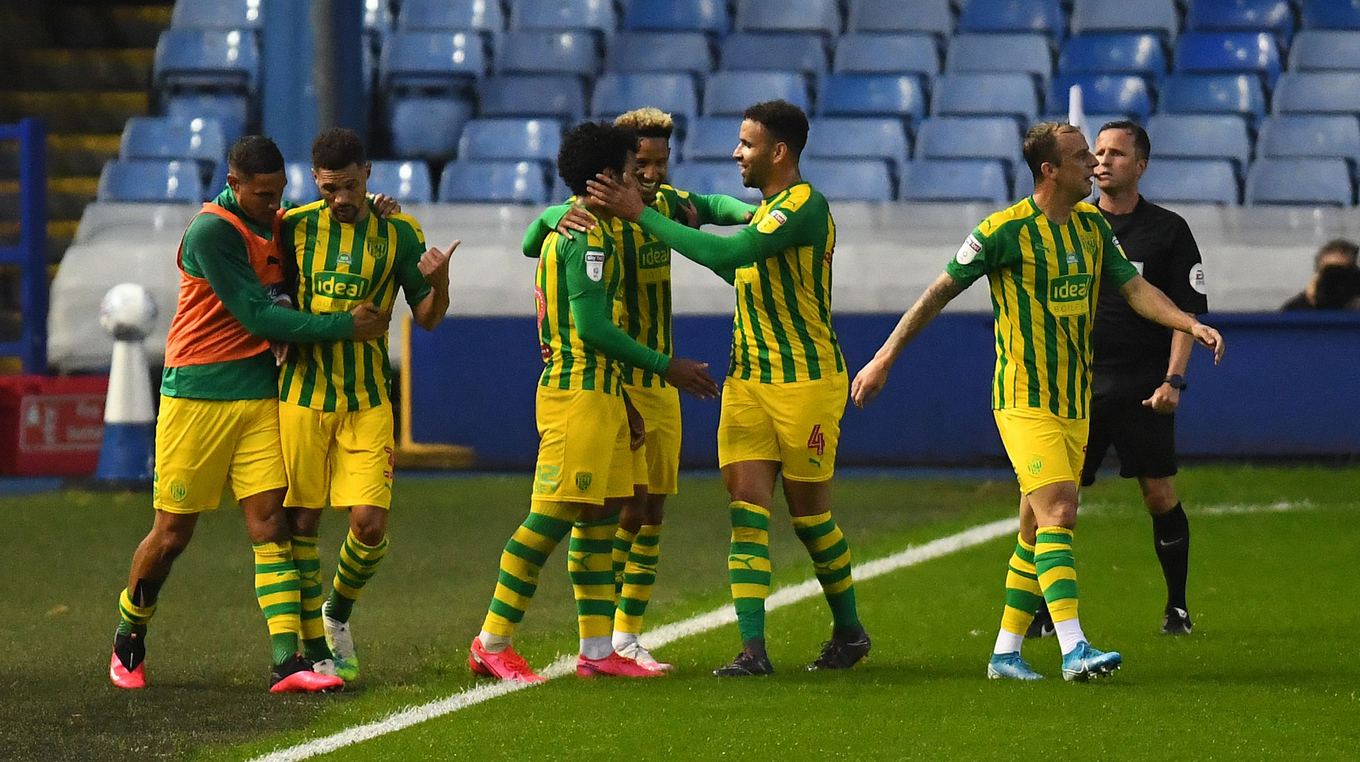 Albion advanced their push for automatic promotion and kept the chasing pack at bay with a hard-fought 3-0 win at Hillsborough on Wednesday night.

A Charlie Austin penalty was followed up by a Matheus Pereira double, as an exquisite header and a drilled close-range effort sealed victory at Sheffield Wednesday and retained the Baggies’ five-point advantage over third place in the Sky Bet Championship.
Slaven Bilić made five changes to his starting XI as Albion enter a period of seven fixtures in just 22 days.
Charlie Austin replaced Hal Robson-Kanu up front, while Kyle Bartley, Filip Krovinović, Rekeem Harper and Dara O’Shea made their first starts since the league resumed in June.
And Albion started brightly. Grady Diangana had the first shot of the game after just 90 seconds when his left-foot effort went a yard over from distance.
Albion came out the blocks in a more direct fashion than they had in their opening two fixtures with Austin keeping Wednesday defenders busy from the outset.
The hosts soon made their first forward move of the game with Jordan Rhodes prodding a volley wide of the left upright from Liam Palmer’s right-wing cross.
Wednesday went closer still on 10 minutes when Connor Wickham headed into the side netting from Jacob Murphy’s corner.
Kadeem Harris almost netted a fortunate goal moments later when his left-foot drive clipped the heels of skipper-for-the-night Bartley but Sam Johnstone recovered to make a comfortable save.
Albion, who had started brightly, were by now under sustained pressure from the hosts and Adam Reach was the latest player to fire at the Baggies’ goal, flashing wide of the post from 20 yards.
After a blistering start the game reached an impasse after the first-half drinks break with both sides struggling to create clear-cut opportunities.
With eight minutes of the first half remaining Albion were awarded a penalty after O’Shea was dragged down by Moses Odubajo as the pair were drawn to Pereira’s outswinging free-kick.
Up step Bostin’ Austin who sent Joe Wildsmith the wrong way to coolly slot the ball inside the right post and give Albion their first goal since the restart.
Harper almost doubled Albion’s lead in first-half stoppage time but saw a well-hit, 20-yard shot whistle past the post.
Unchanged after the interval, Bilić’s men were soon in pursuit of a second - Diangana breaking down the left to find Pereira who fired over from 25 yards.
The Baggies doubled their lead three minutes later with Pereira glancing a superb left-wing header inside the back post with consummate ease.
Wednesday almost pulled one back on the hour mark but Harris' curling effort hit the post full-on and bounced to safety.
Wickham saw an ambitious half-volley fly wide of the right post on 65.
Kamil Grosicki came close to netting Albion’s third from fellow-substitute Robson-Kanu’s through ball but Wildsmith was quick off his line to smother.
Grosicki was denied once more with 10 minutes remaining when a last-ditch block from Moses Odubajo halted his goal-bound strike.
Down the other end, Kieran Gibbs managed to get his body in the way of a close-range Wickham shot to divert it for a corner, before the Baggies secured the points.
Grosicki's cross found Pereira unmarked at the back post, and the Brazilian shifted the ball on to his left before drilling a powerful strike into the roof of the net, as Albion made it 12 league wins on the road this season.
Albion: Johnstone; O’Shea, Bartley, Hegazi, Gibbs; Sawyers, Harper (Ajayi 88); Diangana (Robinson 55), Krovinovic (Grosicki 69), Pereira (Livermore 88); Austin (Robson-Kanu 69).
Subs: Bond, Furlong, Brunt, Townsend.