Morton: Wembley win has made me more determined 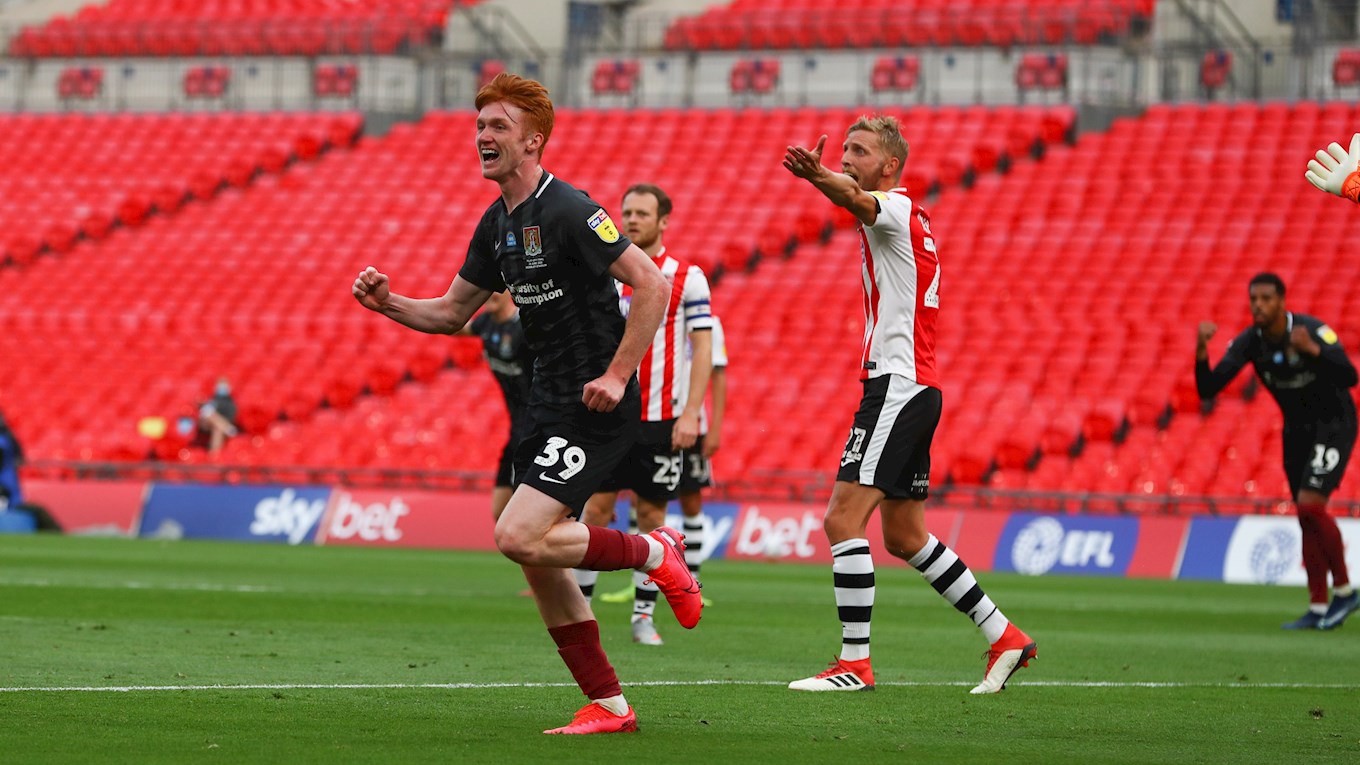 Callum Morton believes gaining promotion with Northampton Town via a 4-0 Sky Bet League Two Play-Off Final Wembley win against Exeter City has only made him more determined for future success.

The 20-year-old Albion forward has had a whirlwind experience since signing for the Cobblers on loan in January, making 12 appearances and scoring eight goals - three of which came in the Play-Offs.

Firstly Morton fired in a double to reverse a 2-0 home defeat against Cheltenham Town with a 3-0 away win in the Play-Off Semi-Final, before netting Northampton’s second in a 4-0 win against Exeter City at Wembley in the Play-Off Final.

And experiencing the high of winning under the Wembley arch has only strengthened Morton's motivation to be successful, he says.

“Getting promotion makes you even hungrier to want more success in the future,” said Callum.

“You’d think without the crowds it wouldn’t be as special but just scoring at Wembley in such an important game for Northampton was some feeling. Winning games is an unbelievable feeling and getting that feeling again and again is brilliant.”

“It was unbelievable at my age to play at the home of English football. It’s a bit surreal, especially considering I have been several times in the past few years to watch games there. It is so different when you are on the pitch to when you are in the stands. Getting the win was even better.

“I’ve loved it at Northampton. Just getting out and getting exposure and first-team football. It is a good club and they have looked after me; everyone around the club, the coaches and the medical team when I have picked up little injuries have been great for me. Getting the exposure to football on a regular basis, especially after the long injury setback I had, makes you even more willing and there is more desire to play football week in and week out.

“This time last year I was learning to walk and jog again, which just seems like light years apart from where I am now. To get back from such a big injury at such a young age and then to come back and hit the ground running and do what I have done so far is quite surreal,” said Morton.

“To top off the season by getting promoted, I don’t think many people would have given us a chance before the Play-Offs began and after the first game I think they would have written us off even more. To go out and score the seven goals we did unanswered against two top teams in the league was unbelievable.

“Physically and mentally I have developed playing in League Two. It is a good standard and the defenders are clever and they have a few tricks, so in the first couple of games I was getting used to it and I was in and out of the team. Once I managed to nail myself down a starting place in the team, then to be scoring goals, I have outweighed even my own expectations to score eight goals in 10 starts. That’s a great return personally, and as a team we managed to get promoted which tops it all off.

“The aim when you are at your parent club is always to play first-team football there but if that’s not possible for whatever reason, or if they don’t think I’m ready yet, then I'll happily go on another loan to whatever level is deemed necessary for me to play. The most important thing for me next season is to be playing football and hopefully I will get 40 or more appearances in league football under my belt next season. Playing football is my aim next season."