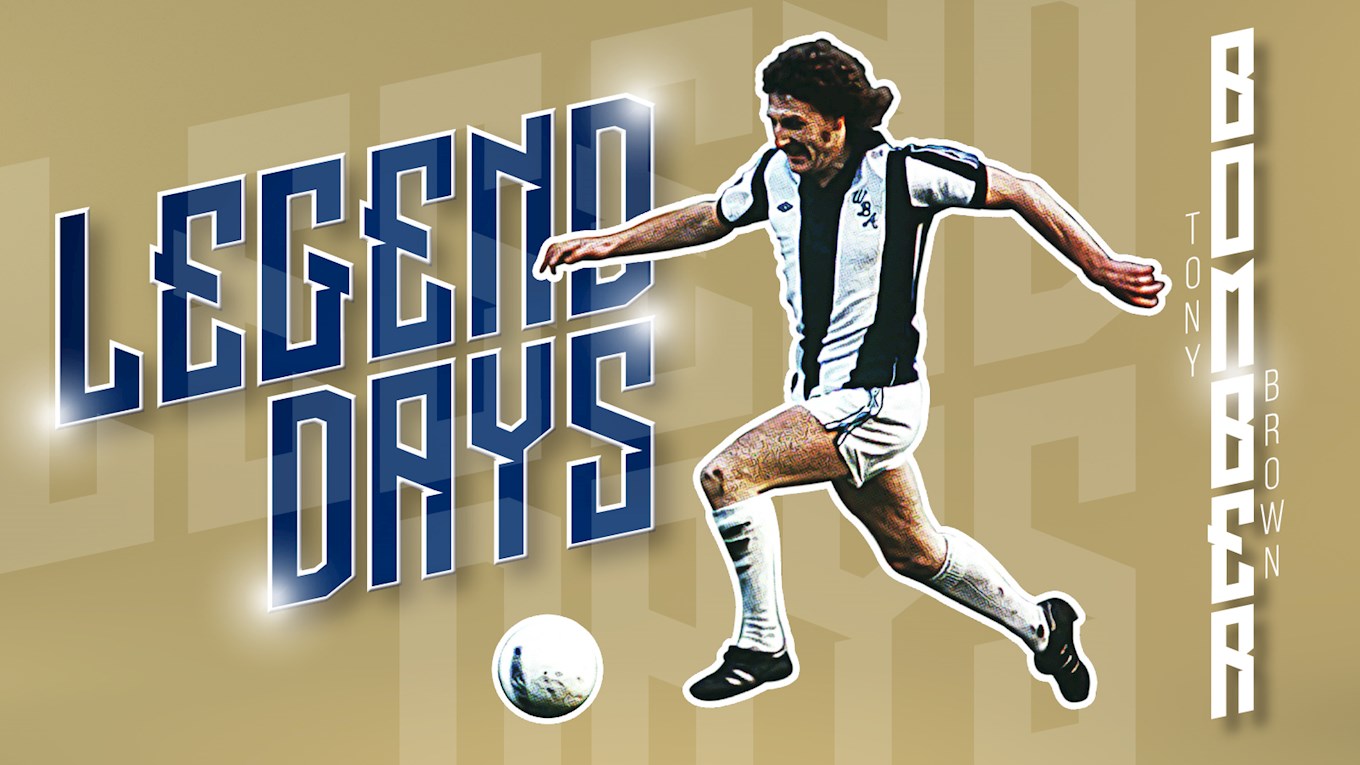 Legend Days will celebrate Albion players who have truly earned their status in the upper echelons of Baggies folklore - beginning, quite rightly, with the one and only Tony "Bomber" Brown...

His honours include the 1966 League Cup and The FA Cup in 1968 with his years of dedication to the Baggies making him one of the Club’s all-time greats. The three-time Midlands Footballer of the Year finished the 1970/71 season as the Division One top scorer with an astonishing 28 goals from midfield. It is not known why his incredible Albion record earned him just one England cap. After relegation in 1973 Brown was a mainstay of the side that returned the Club to the top flight, netting an all-important volley in his hometown of Oldham to fire the Baggies to promotion in 1976. In his latter Albion playing days he experienced a renaissance under then-boss Ron Atkinson whose side narrowly missed out on the Division One title in 1979, but earned legendary status for their entertaining brand of football.

A two-year spell in the United States with New England Tea Men (renamed Jacksonville Tea Men for the second season) followed his departure from The Hawthorns, before subsequent stays at Torquay United and Stafford Rangers preceded his retirement.

Brown went on to be a coach at Birmingham City and Albion, before taking to the airwaves as a summariser for a host of local radio stations. He continues to co-commentate on most Albion games for BBC Radio WM.

In 2014 Brown was honoured with a statue at The Hawthorns under which a plaque reads, “The moment I walked into The Hawthorns I knew I was home.”

The boy from Oldham

It took Tony Brown just seconds to fall in love with the Baggies when he first stepped inside The Hawthorns in 1961.

Brown, having not yet earned his “Bomber” nickname, began his football journey in Manchester after relocating with his family from Oldham.  After impressing for his local team, Manchester City were first to show interest in signing young Tony as an apprentice.

Despite agreeing to sign at Maine Road he accepted an offer to take a trial at The Hawthorns following an approach from Albion’s Manchester-based scout John Shaw. Here began a love affair that remains alive and well 59 years on.

At just 15, after only recently leaving school, it seemed fate had brought the Baggies and Brown together - that and Shaw knocking on the door of his Wythenshawe home to convince teenage Anthony and his family that Albion was the place for hm.

“Tony Brown - the best goalscoring player I’ve ever worked with and you knew he’d be bursting blood vessels when we went up to attack” - Ron Atkinson, Albion manager 1978-81

Little did he know, having travelled down to West Bromwich for trials on the day, that the schoolboys were playing a practice match against the Albion apprentices and the offer of partaking in the match was one just too good to refuse.

Brown netted a hat-trick in his first runout in front of the Baggies hierarchy which compelled the Club to offer the forward apprenticeship terms at The Hawthorns immediately after the warm-up game.

Time learning his trade and impressing in Albion’s multiple reserves sides was rewarded by newly-appointed manager Jimmy Hagan who made it a priority to reward Brown with his first professional contract.

Hagan would also be the one to give the young inside forward his Throstles debut - just a couple of days before his 18th birthday in 1963 - when the Baggies ventured over to East Anglia to take on Ipswich Town.

Brown secured a debut goal as Hagan’s men ran out 2-1 winners in front of a crowd including Tony’s father, who had made the long trip from Manchester to Portman Road to watch his son make his maiden professional outing.

They say don’t change a winning side but Brown was forced to sit out a 0-0 draw in the Black Country derby four days later, before watching from the sidelines as the Throstles were beaten at home by Sheffield Wednesday the following Saturday.

The stakes could hardly have been higher for Brown’s first taste of action at The Hawthorns - a feisty local derby against Aston Villa. But again Brown rose to the challenge, once more scoring as the Baggies recorded a thrilling 4-3 victory on home turf.

Brown could still not hold down a first-team berth and opportunities during his first season as a full-time pro were scattered throughout as Hagan brought him in and out of the picture with the inside forward ending his opening campaign with five goals in 13 appearances.

Brown became more involved during his second term at Albion, securing his first professional hat-trick for the Club in a 4-1 victory over Sunderland in just the second game of the 1964/65 season.

Brown, who scored six goals in the opening seven games of the campaign was again dropped, but was able to force his way back into the first team picture by bagging 22 goals in 20 reserve appearances.

The midfielder remained in the reserves at the beginning of the 1965/66 season, but an injury to Clive Clark presented the opportunity he needed and was one he didn’t take for granted as his Albion career started to take off.

“There are many players who can be one-season-wonders, flashes in the pan but Tony certainly wasn’t one of them. Every season he was consistently among the top-scorers but it was in training where you’d see how good a player he was” - John Wile, Albion 1970-83

In Clark’s stead, Brown scored 17 league goals in 35 appearances, and his incredible League Cup form, helped “Bomber” finish the term as Albion’s top-scorer in all competitions with 28 goals.

His 10 goals in the League Cup helped the Baggies lift the trophy in 1966, with a dramatic 5-3 aggregate victory over West Ham United.

The Throstles were, by this time, earning a reputation as a cup side, and following the disappointment of losing the 1967 League Cup final at Wembley, the Baggies returned a year later to win their fifth FA Cup. Albion were again League Cup runners-up in 1970, meaning “Bomber” et al had reached four major cup finals in just five seasons.

Brown fired a remarkable 30 goals from midfield in the 1970/71 season, finishing as Division One top scorer, having netted 28 of Albion’s 58 league goals.

His prolific form confirmed in the mind of Sir Alf Ramsey what many at The Hawthorns already knew - that he was worthy of an England call-up. Bomber earned his solitary cap for the Three Lions in a 0-0 stalemate against Wales at Wembley in May 1971. Despite continuing to notch the goals for the Baggies, he would not receive another opportunity to represent his county.

Relegation to the second tier in 1973 could have easily seen Bomber depart Albion to remain a top-flight regular elsewhere, but his devotion to the Club shone through.

A key part of the Baggies, he remained and after two failed attempts Albion returned to the First Division at the third time of asking and Brown was pivotal in doing so, returning to his roots to score the only goal in a win over Oldham Athletic - which clinched promotion in 1976.

The renaissance and retirement

Bomber’s formidable composure in front of goal was a renowned quality which earned him cult status among the Albion faithful, being named as the leading goal-scorer at The Hawthorns for five consecutive seasons from 1970/71 to 1974/75, as well as a further year as Albion’s go-to-man during the 1977/78 campaign.

He leads the way in European tournaments for the Baggies with 16 starts and eight goals. He also holds the club’s penalty record having netted 51 from 61 spot-kicks.

“Tony had a phenomenal strike-rate from midfield. Bomber had that uncanny sense of space, timing and he was a great player to play with” - Cyrille Regis, Albion 1977-84

Midlands Footballer of the Year status was earned a record three times over his Throstles career, but 1980 was the year Bomber departed his beloved Baggies for a new challenge in America.

He enjoyed two seasons with the New England Tea Men, who moved to Jacksonville for the second term, followed by a return to the Midlands, where he remains to this day.

A short coaching career followed his retirement from football in 1983, working initially with Birmingham City before a spell with the Albion.

Legendary status was cemented into Albion folklore in 2014 for his accolades at the Club when the Tony Brown statue was unveiled near the East Stand of The Hawthorns.

Bomber remains a regular at The Hawthorns where he works as a co-commentator for local station BBC Radio WM.