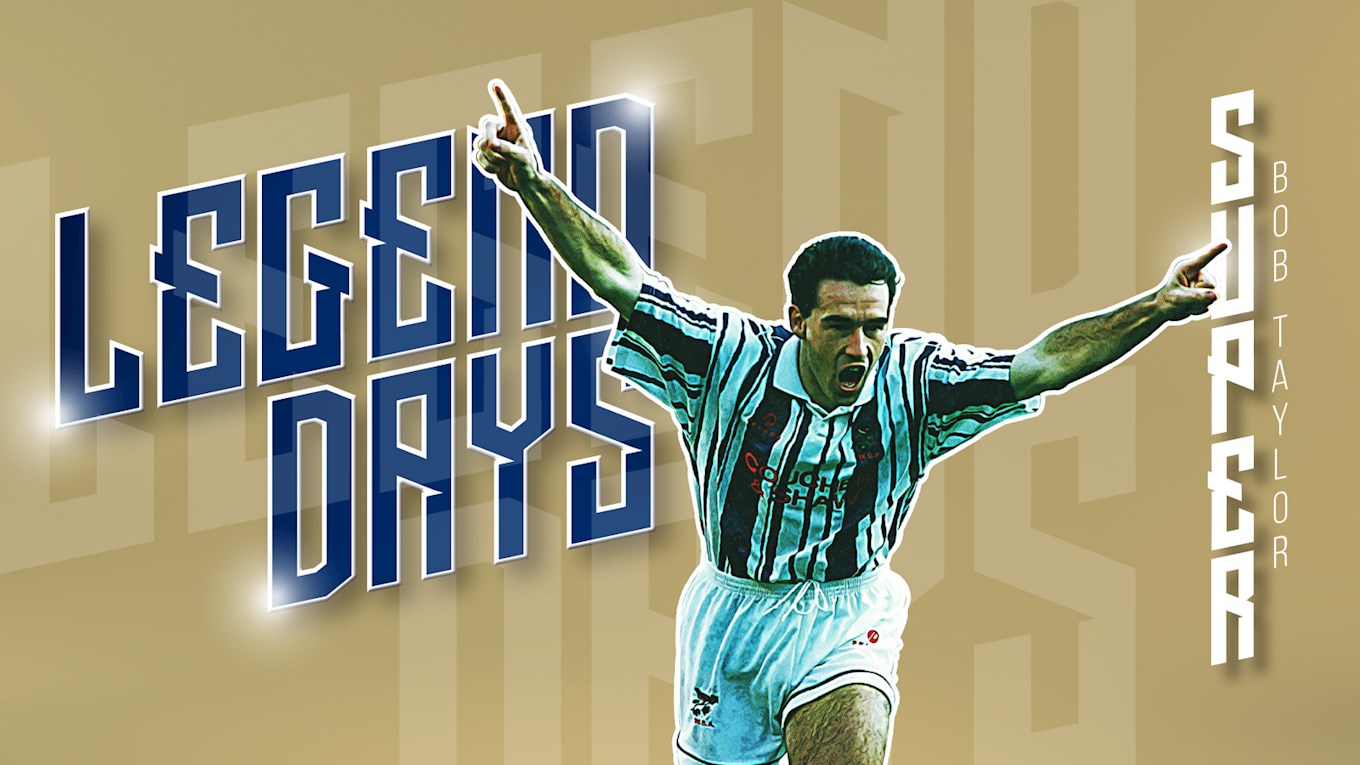 He was born in the north-east but he made the Black Country his home, the second instalment of Legend Days brings us to a man who loves Albion so much he’s never said goodbye - the true hero of the ‘90s, it’s “Super Bob”.

For several seasons Bob led the way as the Club’s leading scorer and netted pivotal goals that are not only engrained in the rich history of the Club but also contributed to Albion’s rise up the English Football League pyramid from Division Two to the Premier League.

Taylor produced a memorable display in a 3-0 win over Port Vale to help turn the 1993 Division Two Play-Off final in Albion’s favour and secure promotion to Division One, where the Baggies remained until 2002. A fans’ favourite widely known as “Super Bob” for his captivating displays, Taylor joined Albion’s 100-goals club by notching against Derby County in 1996. A short spell in the Premier League with Bolton Wanderers followed in 1998 but Bob, who had unfinished business with the Baggies, returned under Gary Megson in 2000 with Albion fighting against relegation back to the third tier. Penning a deal on deadline day in March, Taylor netted on the final day against Charlton to keep the Baggies in the division, but perhaps his most memorable achievement at The Hawthorns was yet to come.

In Taylor's 10th season at the Club, the 2001/02 campaign, the Baggies again left it late to seal their fate and Taylor once more delivered the all-important goal as Albion overcame Crystal Palace 2-0 to seal promotion to the Premier League for the first time. It was fitting that “Super Bob”, who had already achieved cult status at The Hawthorns, netted the goal that took Megson’s men to the top flight following a 16-year absence.

"I've got to the promised land with my beloved team and that is all that matters,” Taylor said after the Palace promotion game.

Bob ended his career in non-league running out for Tamworth for two years prior to joining Kidderminster Harriers who proved to be his final club before hanging up his boots.

He regularly attends games at The Hawthorns as a prominent member of the Former Players’ Association and often joins fans on the road at away games.

The making of “Super Bob”

Hartlepool and Newcastle United did not see Taylor’s potential when he went for trials as a teenager which meant Horden Colliery Welfare were the first to recruit the 17-year-old.

Barely half a year into his agreement with the non-league outfit, Taylor departed to begin building a professional career at Leeds United.

The Yorkshire side offered Taylor his first professional terms once then-manager Billy Bremner had persuaded him to join the cause and it did not take long for him to burst onto the scene, making his debut in April 1986 against Millwall.

His spell with the Whites saw him come close to reaching the top flight via the 1987 Play-Off final, but Charlton Athletic ended that hope and the appointment of Howard Wilkinson as boss in 1988 prompted the end of Taylor’s spell in West Yorkshire.

Leeds’ loss was Bristol City’s gain as Bob made the move to the West Country in 1989, where he earned cult status among the Robins faithful.

Initial performances earned, as the Reds fans described, the status of “God” as a result of his fine displays and Taylor began his first full campaign at City in similarly ruthless fashion.

His exploits won him the club’s Player of the Year award in 1989-90, leading the way in the Third Division with 27 goals, which also helped guide the Robins to Division Two.

More than 100 appearances passed over two years at Ashton Gate and in 1992, Bob would move to the West Midlands and form a lasting relationship with West Bromwich Albion.

The £300,000 fee the Baggies paid for Taylor seems like a steal now following the success he enjoyed at The Hawthorns.

Then-gaffer Bobby Gould recruited Taylor in January 1992 to replace Don Goodman who had departed for Sunderland at the start of the campaign.

“In Bob’s case the way he played as a centre-forward, not only does he work like a dog but he likes to be used all the time; give him the ball and he’ll control it, then he sets somebody else or himself up. There wasn’t that many people like that about" - Ronnie Allen, Albion centre-forward 1950-61

It seemed a common theme throughout his playing days that, wherever he went, “Super Bob” knew how to make a good first impression.

A home bow at The Hawthorns saw Taylor bag his maiden Albion goal in a 2-0 win against Brentford but no doubt his first away game for the Throstles would have been that bit sweeter following another two goals in a 3-0 victory against Birmingham City at St Andrew's.

These moments will have provided fond memories for Taylor as he concluded his first season with the Baggies tallying eight goals in 19 games.

Failing to secure promotion cost Gould his job but Bob’s goals gave Albion momentum for a promotion push in his first full campaign at The Hawthorns.

New boss Ossie Ardiles brought an attacking way of playing which complemented Taylor’s poaching style of striking, with no forwards in the division able to match his consistent goalscoring ability, as he led the way in Division Two scoring 30 league goals as Albion reached the Play-Off final.

“You get natural goal-scorers and I think Bob is a natural goal-scorer. He scores a lot of chances and creates a lot for people up front. Bob was, I suppose the same as I used to do is miss a lot but when you think of 35 goals in a season… it’s a tremendous achievement” - Jeff Astle, Albion centre-forward, 1964-74

Super Bob was the game-changer against Midlands outfit Port Vale at Wembley and exhibited his usual knack of being a nuisance to opposition defences as his clever movement in the second half of the game forced Vale defender, and former team-mate at Leeds, Peter Swan to bring down Taylor as he ran at goal. Swan was dismissed as a result and Albion fully capitalised on their advantage to win 3-0 and secure promotion to Division One.

This success was helped by Bob's clinical partnership with Andy Hunt and it was a relationship which lasted over a number of seasons after advancing to Division One.

Although they struggled to adapt in their first season in the Football League’s second tier, surviving relegation on the final day, Taylor’s poaching ways continued as he finished the 1993/94 campaign as the Throstles’ leading talisman again, with 18 goals to his name.

He surrendered the title as the Club’s go-to-man to his strike partner Hunt for the following campaign, but would pick up the mantle once more in 1995/96 when he recorded his third season at the top of Albion’s striking department with 17 goals.

“Wherever Bob’s been there’s been a steady stream of goals and with him, you knew what you got. You could always play the ball into him and he would keep and there was a very good understanding with him because I knew he could play me in as well” - Richard Sneekes, Albion centre-midfielder 1996-2001

That year saw Bob skipper the Baggies for the second half of the campaign, making history by becoming one of just nine players to have scored 100 goals for the Club, netting in the season-finale victory over Derby County to engrain himself in Albion folklore.

Super Bob would spend another two years at The Hawthorns before Denis Smith’s appointment as manager brought a close to Taylor’s time with the Baggies when Premier League Bolton came calling in January 1998.

The striker finalised a permanent deal to join Wanderers at the end of the 1997/98 season and enyoyed two years in Lancashire, but his days in blue-and-white stripes were far from over.

Taylor returns to The Hawthorns

Gary Megson’s decision to recruit Taylor on deadline day was fully rewarded as the forward reignited his finishing exploits once again and proved to be pivotal in maintaining Albion’s standing in Division One.

Taylor fired an impressive five goals in eight matches as the Baggies avoided relegation with an unlikely 2-0 win over Division One Champions Charlton on the final day of the season, with Super Bob again netting when it mattered.

The following campaigns did not see Bob replicate the feat he had achieved in his previous spell at the Club but the goals he did score would be decisive in creating new history for the Throstles.

In the final six games of the 2001/02 season, Super Bob scored priceless goals against Nottingham Forest, Coventry City and Rotherham United to secure seven of Albion’s final 16 points, but arguably his most defining Albion goal was reserved for the final day of the campaign.

Albion’s first promotion to the Premier League was confirmed at The Hawthorns against Crystal Palace in a 2-0 win, as Taylor scored the second and deciding goal of the game as the Baggies joined the elite at the pinnacle of English football.

Robert’s time with Albion ended in unfortunate circumstances through injury and a subsequent fall from the top flight followed his final year in the Midlands.

The striker spent time lower down the footballing ladder towards the end of his career, playing at Cheltenham Town, Tamworth and Kidderminster Harriers.