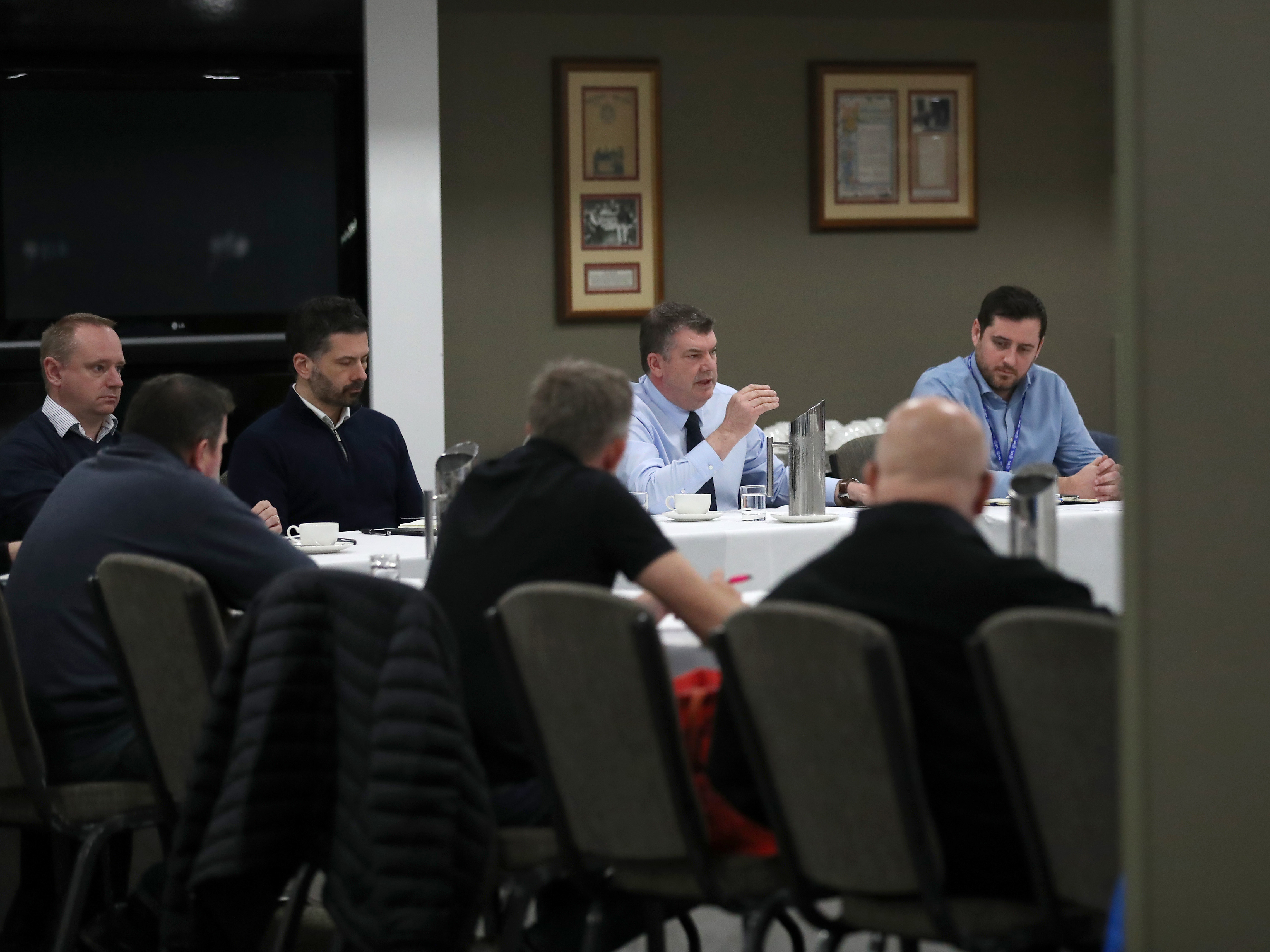 RG introduced himself, gave an insight into his background and experiences at Umbro, Manchester United, Chelsea, Reading and in various roles abroad, and spoke of his aims for the future. This included the need for the owner and Chairman, Guochuan Lai, to be more involved, a want for better communication, more listening to and involvement from the ‘heart and soul of the club’ (the supporters) and the aspiration to build solid foundations while being successful on the pitch.

RG also explained his previous consultancy role with Albion in the summer and looked at everything for six months, what his observations were and how he was offered to become CEO. He then stated the reasons for his first major decision, to part ways with Valérien Ismaël, and confirmed he quickly identified Steve Bruce as the outstanding candidate to become the club’s new manager.

MM stated traffic is an issue around The Hawthorns, not only on matchdays but at all times. He cited a number of factors, such as issues with the metro system (pre-Christmas), lots of roadworks and links to the Commonwealth Games. He said the club is aware of the problems and is engaging actively with Highways England, Sandwell Council and other relevant agencies, though there isn’t likely to be a short-term fix.

Car parking was also discussed, and MM said some local matchday car parks closed due to Covid and are yet to re-open. He also stated while park and ride isn’t totally viable at the moment he will look into it as a solution, and also explained there is a cycle shelter at the Academy in response to a follow-up question on that topic.

MM said he was aware of the frustrations around the vast amount of matches being moved, but said the club has no control. He confirmed it has been raised with the Championship representative on the EFL board, and that there is an EFL meeting coming up where it will be raised again. He also said the club were aware it will have an impact on future season ticket numbers and knows it is affecting the attendance of young supporters, especially for Monday night fixtures. MM acknowledged the traffic issues also play a part in the latter point regarding young supporters.

SK pointed out it influences the club’s commercial and hospitality avenues, too.

MEASURING THE SUCCESS OF COMMUNICATION IMPROVEMENTS BETWEEN THE CLUB AND SUPPORTERS

IS confirmed the club has committed to more communication, with the intention to communicate regularly with both the media and supporters. This led to a further conversation about fans wanting to know what the wider plans are going forward.

RG said he wants to continue to run Albion sustainably, citing a desire to be sharper in the transfer market, be better with player contracts, and ensure there is a pathway for young players into the first team so no more are lost to other clubs. He also confirmed MM is working on enhancing facilities for the Academy.

RG stated there is no immediate intention to hire a technical/sporting director but did not rule out bringing one in in the future. He said the wider issues need to be addressed first.

MM reluctantly said this was practically impossible due to arrival times, changing rooms and other general practicalities. However, he confirmed there will be an announcement soon on a women’s game taking place at The Hawthorns.

IS also addressed women’s fixtures not yet showing up on the website, citing technical issues and saying they should be resolved in the near future.

LACK OF PRE-MATCH FACILITIES FOR SOCIALISING

SK said he had previously spoken about why the Fanzone was discontinued, explaining the repercussions from the 2018 relegation why it was eventually shut down. He confirmed he has been trying to find a new partner who can put on a good experience for supporters, and is hopeful of sorting something out soon.

IS & RG committed to meeting with the main branch of the supporter’s club and offered support to the smaller branches.

FANS FEELING UNCOMFORTABLE DUE TO ANTI-SOCIAL BEHAVIOUR AT MATCHES

MM believes the issue is not unique to Albion and stated football in general seems to have seen an increase in the issue post-Covid. He encouraged supporters to report any anti-social behaviour and was aware of the incidents at Millwall, which he said the police were currently looking at. MM also said the EFL has sent out correspondence on how clubs can deal with the problem, and admitted that ‘Plan B’ has been the main priority over the last few months but they will now have an increased focus on anti-social behaviour. This could include more searches upon entry into the stadium, and the potential to take the club’s own stewards to away games on a trial basis which will then be reviewed at the end of the season. Post meeting note: this will be in effect for the away game against Luton Town.

Smoking in the stadium was also raised. MM said he was aware from comments that people have been smoking in the toilets and the club are looking into resolving that issue. A possible solution would be to create a smoking area to the East stand similar to that in the Smethwick End. Due to the roads, it is not possible to do this in either the Birmingham Road End or West Stand.

SK said this was constantly under review. He pointed out that the club shop went through a restructuring process and - after they lost Merry Hill - there was a significant push to online. This reduced overheads, increased profits and has been a major success. He said the club is making more money than pre-Covid when the shop was open all week and matchday takings have doubled. SK explained they are adaptable to deal with certain times of the year, giving an example of school half terms.

The point about a lack of certain merchandise in the shop was also raised. RG said times have changed in reference to major suppliers, and explained orders have to be placed for a whole season so it can be hard to always get the projections correct. He said the club will review everything, including the store opening hours, and wants to make merchandise accessible to everybody all of the time – though admits there are challenges.

MM finished the discussion by stating the Ticket Office is open from 10am to 3pm Monday to Friday, as well as on matchday mornings, and the demand isn’t there to open it at any other times. He reminded all that tickets were available 24/7 online.

SK said the club is aware, and affected itself, by the cost of living rise. He agreed that there was a discussion to be had about ticket prices.

MM stated the season ticket process will begin in the coming weeks and everything would be considered, but insisted the club were aware of and understood the challenges supporters are currently facing.

Issues such as the price of children’s tickets and longer-term season tickets were also discussed, as well as the direct debit scheme.

The agenda point was finished off by MM talking about the club being ‘greener’. He said progress was being made before Covid hit, but it’s back on the radar now and sustainability is something that’s important to them.

MM said it’s not on the agenda at the moment, but he’ll keep it on the list for future debate.

MM explained any ticket purchases where a person is involved, such as face-to-face, over the phone or where a ticket is posted, will add a fee to any transaction. He said it does not apply per ticket, only per transaction.

MM said the sections for disabled supporters can sometimes be open to the elements as much as anywhere else in the stadium when there is bad weather. He pointed out the club was given praise in 2017 by the Premier League and Level Playing Field for how they adapted facilities to become more accessible in an older stadium. MM advised fans to get in touch with the club if there are any problems and they will do their best to help.

IS explained in an ideal world every piece of video would be subtitled, however there are issues at play such as the huge amount of time, work and resources it can involve. Time sensitivity is also a problem, as content like pre and post-match interviews only has a short shelf life and needs to be released as quickly as possible. IS said it is something the media and communications team will look at.

SK discussed what an ideal size for the group would be, and whether the Assembly and the club would get as much from meetings if there were too many people there. He said previously the numbers had gone into the 40s, but he felt any more than in the 20s was difficult to control. The need for some younger members was spoken about, with RL stating the demographic potentially needs expanding. Everybody agreed it was something to go away and think about.

It was asked whether Under-23s highlights could be shown on the big screen before a first team game, with club representatives all agreeing it was a good idea.

A question on bringing back the family section was also asked, and MM stated they would look into it. He said they needed to identify an area of the ground where it could be done. RG said he would be in favour.

RG said he would meet with representatives of the minority shareholders in the near future in response to a question regarding a historic loan against the club.

And finally, the PA system at The Hawthorns was discussed. Members of the Assembly said they believed the positioning of the microphone for individuals was the issue, citing Dawn Astle’s recent speech as very clear compared to other guests. MM said it was something the club would keep chipping away at, and they would look to provide guests with their own microphone if it would help.