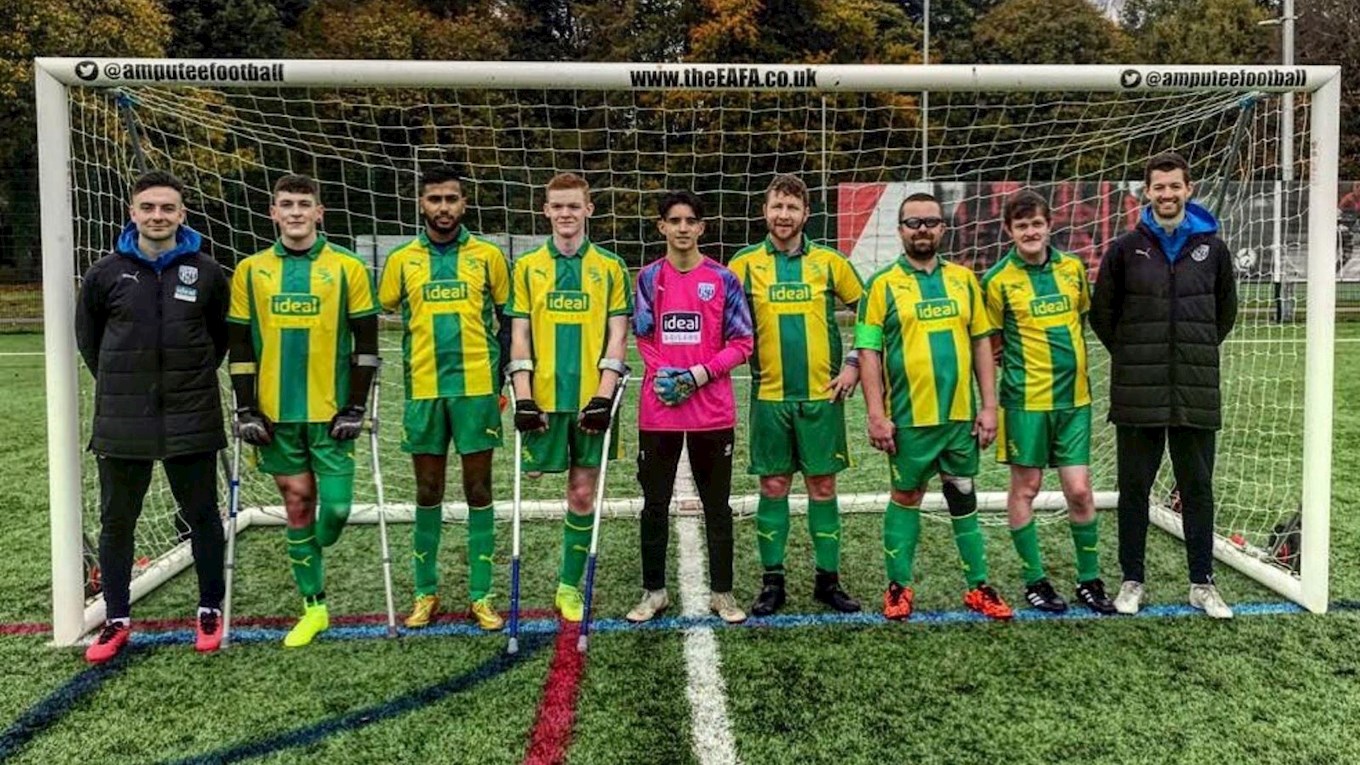 On 27 May 2017, Albion Amputees played their first fixture with a team comprising of players that were new to the sport and locals that had tried it on a handful of occasions. Since then, their growth has been huge.

It was three months earlier in February 2017 when the setup was created, with The Albion Foundation holding an open taster session for local footballers with arm or leg amputations to try out amputee football.

Now three years on since the first game, the team’s development has been incredible, as explained by the Foundation’s Head of Disability, Paul Glover; and two players that have been there since the start, Marc Cronin and Cameron Boparai.

“It all started when we were invited by England to watch some fixtures at Portway Lifestyle Centre in Oldbury,” says Paul.

“I went up and watched them and was absolutely blown away by the standard of football and the inspirational characters that were there.

“It was clear that there was nothing for these guys in our area, and some local players were travelling to teams such as Arsenal, Portsmouth and Peterborough even though they were based in the West Midlands so in terms of setting up the team, we knew it was the right thing to do,” explains Paul.

To begin with the squad started off at the smallest possible size of five players, but now Albion Amputees has 15 players and plays in the National League Championship – the second tier of amputee football in the country.

Playing football isn’t the only thing which has come of the team though; the squad is a closely-knit unit with each player being able to call another player their friend, as opposed to just a team-mate.

Marc says that joining the Club has been ‘one of the most rewarding things I have ever done,’ and emphasises the bonds that he has created with the other players.

“I have made some great friends and met so many people from all walks of life,” he says.

“It helps you to realise you are not the only one going through the problems that amputees face and there is always someone to offer advice or a different outlook on your problem.

“Outside of football the communication between everyone has increased and we’re all willing to help anyone else out with any problems we may face,” describes Marc.

Cameron agrees that the group is a close group of friends.

“We have a great team spirit on and off the pitch,” Cameron says.

“It’s always good when a new player comes along and gives it a go, even if they are not a football fan.

“We all stay in touch to help or assist each other in day-to-day life and that’s important if someone is a new amputee because most of the lads have the same experiences to help someone through that,” he explains.

The increase in players since 2017 has also allowed the team to be more competitive and at the same time increase the skills that players have.

Development has been a key feature for all the players, with Richie Wintle recently being invited to train with England Under-21s.

“Everyone is taking it a lot more serious now,” says Marc.

“We want to do better and you can see the development in training week by week,” he added.

Albion started the 2020 season emphatically by beating Arsenal and Brighton back in January, since then they have drawn level with two wins and two losses, but still sat third in the National League Championship before games were suspended as a result of the coronavirus pandemic.

Development is also the next course of action for the Club, as Paul explains the plans to set up a youth section.

“We want to consolidate in the National League and continue to compete in that level, but we also have ambitions to have our own youth setup,” he says.

“It’s clear when we travel the country playing against other teams that it’s something that is needed.

“We currently have one player that would be eligible to play but we are on the lookout for anyone under the age of 16 with an amputation who would also be open to getting involved in the sport too,” Paul said.

When speaking to the squad the team spirit that Cameron mentioned is clear to see.

Many talk about how it’s a great group to play with and how tight the squad is on and off the field.

But one of the biggest takeaways is how much they love playing and how after life-changing events for each person, Albion Amputees has allowed them to play the sport they love once again.

To find out more about Albion Amputees, please email paul.glover@albionfoundation.co.uk.