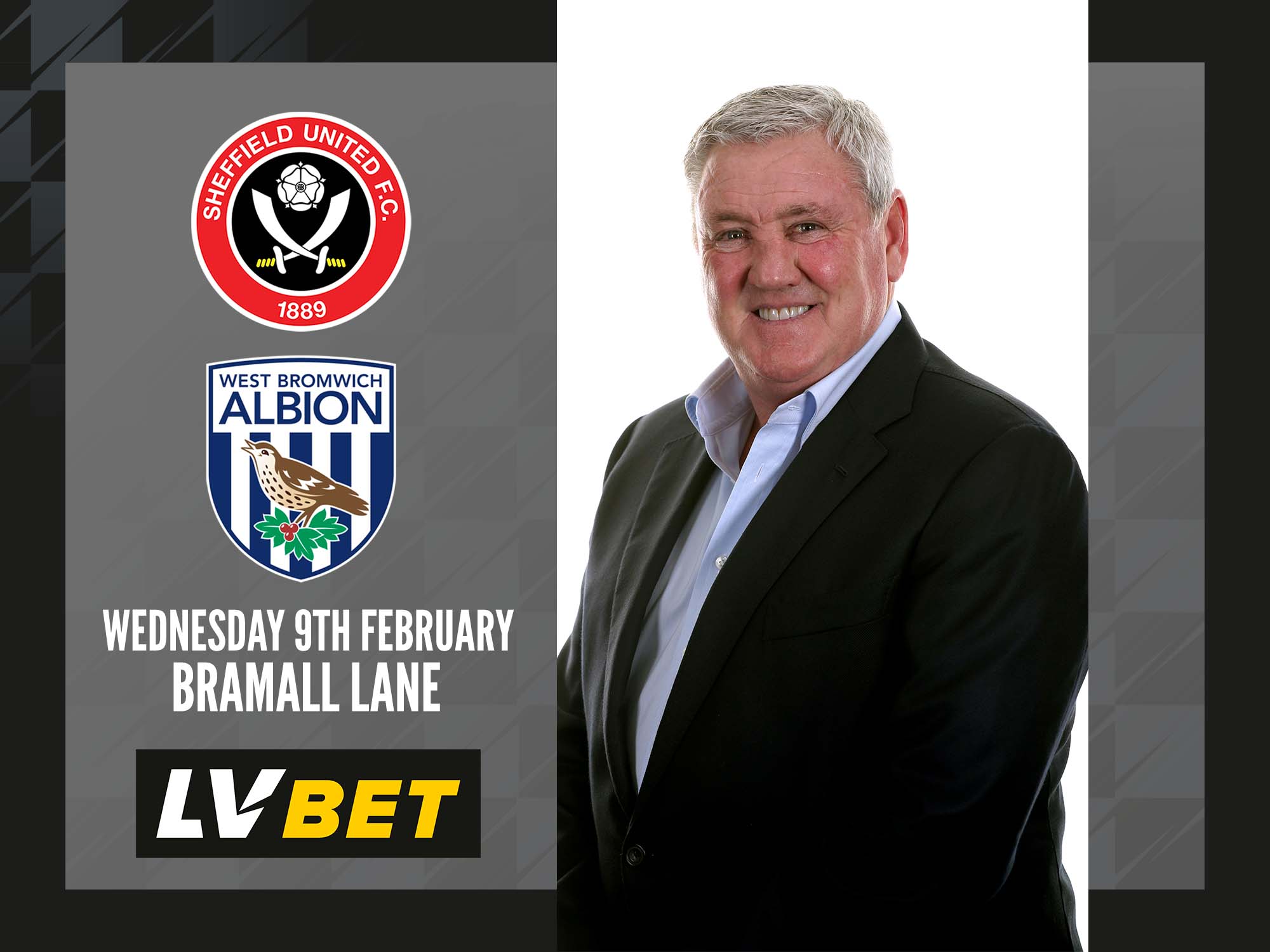 Steve Bruce will take charge of his first game as Albion boss and his 1,001st match in management on Wednesday night when the Baggies face Sheffield United at Bramall Lane (ko 7.45pm).

The new manager was appointed last Thursday evening, signing an 18-month contract and taking on his third job in the West Midlands following previous spells at Aston Villa and Birmingham City.

But a tough test awaits Bruce and his Albion players, with their South Yorkshire counterparts currently enjoying a four-match unbeaten run in the Sky Bet Championship.

Albion fans can watch the Baggies take on the Blades at Bramall Lane live on WBA TV Matchday.

The stream will be available worldwide with a £10 Match Pass, which is available to buy here.

Match Passes include live video coverage from 7.30pm and Baggies-biased commentary from just before kick-off. Subscribers will also be able to watch a full match replay the day after the game.

If you are an overseas supporter with a video subscription you don’t need to do anything else. Audio subscribers can still access the commentary as part of their package, but will have to buy a Match Pass to watch the game live.

To watch the game live go to wba.co.uk/video/live or download the WBA app and look for the red LIVE button when the stream is available.

The Blades defeated Birmingham City 2-1 last time out, enjoyed an away-day triumph over Peterborough United and secured a 2-0 victory against Luton Town during their most recent test on home soil.

Although United experienced a difficult start to the campaign after winning just one of their first seven league games, fortunes changed for the better towards the end of 2021 - with Heckingbottom’s side coming out on top in seven of their last 10 matches.

With their sights now fixed on the Play-Off places, the Blades will be looking to the Championship experience in their side to maintain momentum and, with the division’s all-time leading goalscorer in their squad, they have every chance of fulfilling expectations this year.

Billy Sharp’s strike during United’s 2-2 draw at Preston in January saw him break the division’s scoring record - the striker notching his 122nd goal in England’s second tier. Sharp is the club’s leading scorer this term (10 goals).

An experienced midfield trio of Oliver Norwood, John Fleck and Sander Berge provide energy and security to the Blades’ attacking and defensive play, and with overlapping wing-backs Jayden Bogle and Rhys Norrington-Davies enjoying freedom in their roles out wide, Baggies gaffer Bruce will be fully-prepared for a stern outing on his return to the dugout.

Our previous encounter at the start of the 2021/22 season was one of many Friday night triumphs Albion have secured this year.

A dominant display under the lights at The Hawthorns saw the hosts run out 4-0 winners, with a Jack Robinson own goal, as well as efforts from Dara O’Shea, Alex Mowatt and Callum Robinson completing an entertaining display in B71.

Steve Bruce has enjoyed plenty of success during his previous managerial duels with the Blades.

The new Baggies boss has come across United 14 times during his career in the dugout, winning 10, drawing a couple and losing just two.

All of Steve’s last four encounters against the South Yorkshire outfit came during his tenure as Newcastle boss, where he won three and lost one, seeing his team score six and concede only once.

Albion will wear their black away kit during Wednesday evening’s trip to Bramall Lane.

Haven’t got one yet? Secure yours here.

Albion lineup at 41/20 (3.05) to win their Championship fixture against Sheffield United at Bramall Lane.

Register here and use the code WBAxLVBET to claim a £5 No Deposit Bonus and a chance to win WBA hospitality tickets!