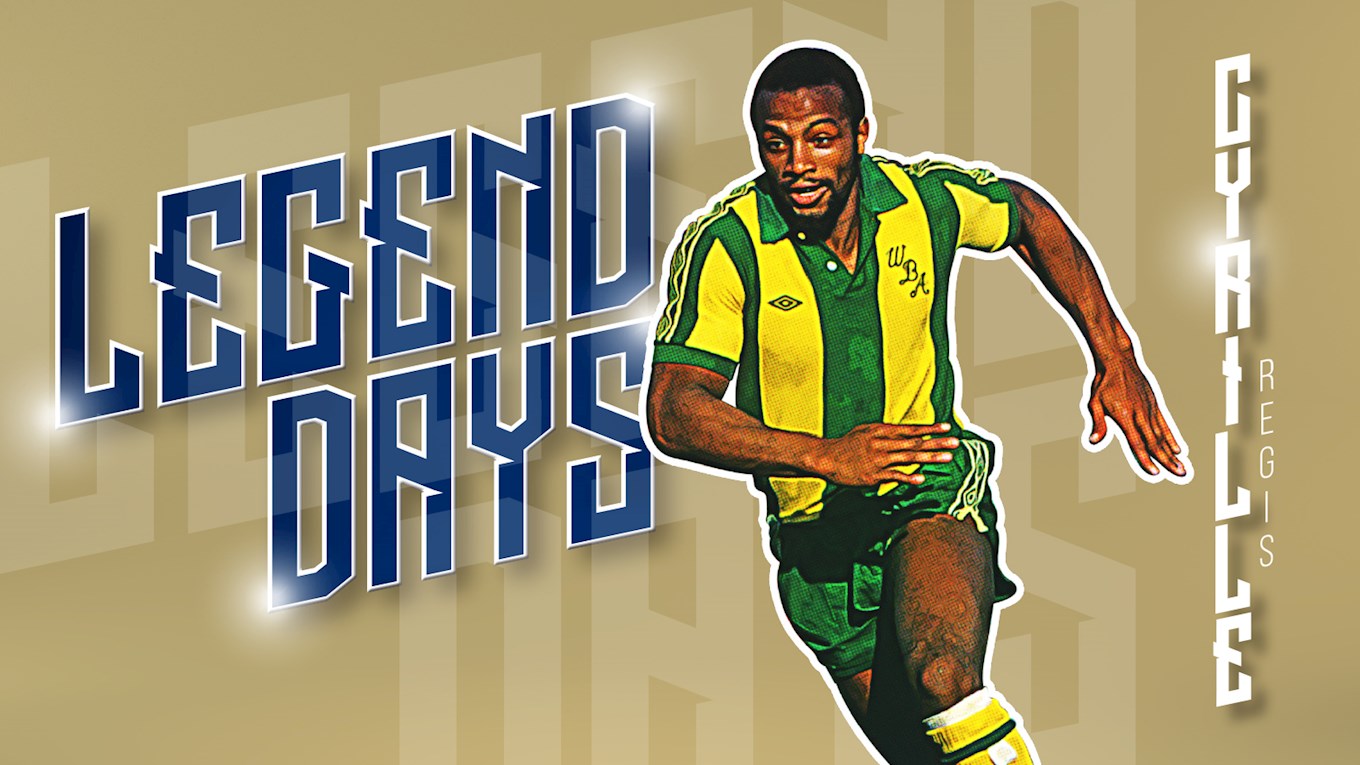 Welcome to another of our Legend Days, which features not just a thrilling star from the 70s but a pioneering figure who left us with more than just his captivating displays by which to remember him. His legacy continues to thrive to this day. It is of course the great, Cyrille Regis.

Cyrille Regis (born February 9, 1958) remains a footballing icon, a thrilling forward who became the talisman for breaking through the bigotry of a different era and encouraging diversity during his seven-year spell between 1977-1984.

He is entrenched in Albion folklore, his exciting explosive style helping him take his place among the Club’s all-time leading scorers with 112 goals across 302 appearances. He was the team’s top-scorer for three seasons from 1981-84.

The Baggies reached the last-four of the FA Cup in Regis’ debut season in 1978 and although the grand stages of both of England’s domestic cup competitions eluded him during his time at The Hawthorns, he was particularly influential in runs which got Albion into the semi-finals of the FA and League Cup in the same 1981/82 campaign.

Cyrille remains the only player to have represented four West Midlands teams in the top-flight but it was at Albion where his goal-scoring accolades earned him a historic call-up to the England national side against Northern Ireland in 1982, becoming just the third black footballer to represent the Three Lions.

Tottenham prevented Albion reaching the final of the League Cup that season but Cyrille would avenge the defeat in his next move to Midlands rivals Coventry City when they beat Spurs in the 1987 FA Cup Final. Regis had shorter spells at Aston Villa, Wolves and Wycombe Wanderers before his swan song season at Chester City saw him hang up his boots in 1996.

Albion will forever remember Regis and the swashbuckling, goal-laden football for which he became the talisman in that memorable era. His figurehead roles in the causes of equality and mentoring of young players is now continued in the Cyrille Regis Legacy Trust following his sudden death in January 2018.

It was a shock which brought all of football to a standstill before celebrated figures gathered at The Hawthorns to honour the great man at a memorial service and then a match-day tribute.

One Albion legend recruits another

Before becoming manager at The Hawthorns, another Albion legend Ronnie Allen was installed as the Club’s chief scout and he soon began promoting the case of then unknown rookie striker playing in non-League football around London. Allen’s faith was backed when Regis made a permanent move to the Throstles in 1977.

Having grown up near the capital since 1963 after his family’s move from Maripasoula, Regis’ early footballing memories were spent in at Molesey and Hayes where he was spotted by Allen.

But Allen was so confident in Cyrille’s potential that despite the uncertainty of the board to negotiate with the 18-year-old, he offered to contribute his own money towards making the deal happen. Ronnie’s confidence was rewarded and an initial sum of £5,000 was agreed with Hayes before the rest of the fee was finalised in May 1977. Johnny Giles’ departure prior to the 1977/78 campaign made way for Ronnie Allen to transfer from the scouting department to the manager’s hot seat, meaning Regis was eased into life in the First Division at Albion by the man who recruited him.

He endeared himself to the Baggies faithful immediately on his debut in the League Cup against Rotherham United, netting twice in a 4-0 win on home soil before following up his goal-scoring exploits just days later on his First Division debut when Albion saw off Middlesbrough 2-1, with Regis scoring following a spectacular run from the halfway line.

Cyrille’s form in the League Cup was a sign of things to come with the Baggies also  managing to progress into the latter stages of the FA Cup and were favourites to lift the trophy under new manager Ron Atkinson. A memorable display at The Hawthorns against Manchester United was followed by victories over Derby County and Nottingham Forest and Atkinson’s vibrant team reached the last four as favourites to overcome Ipswich. But it would be a day when nothing would go right for Albion who were beaten 3-1.

However, his mark had been made and history began to follow Regis. He was a figure of fascination as Albion became the first English outfit to play football in China in May 1978 – he scored six times on this famous trip – before the 1978-79 raised still further the profile of this most thrilling of strikers.

“He was powerful, had a great touch but didn’t score enough scruffy goals. Every one of his goals could win goal of the month” - Ron Atkinson, Albion manager 1978-81 and 1987-88.

Disappointment of the previous season soon became a distant memory as Regis helped sweep Albion into an authentic title challenge which was famously and fatefully frozen out of momentum by a bitter winter which left Albion with a fixtures crush which robbed them of their previous momentum.

Albion still recorded a third-place finish behind Forest and champions Liverpool but that will forever be a winter of discontent for the Club.

By now, there were powerful social elements entering the Regis story as, with Laurie Cunningham and Brendon Batson at his side, “The Three Degrees” were born, a nickname applied by Atkinson in reference to a chart-topping all-female Motown group of the time.

The first time they were named in the same team they made history as the first top-flight side to name three black players in a starting XI but Cyrille remained the central and most iconic figure in the group.

Ronnie Allen returned to The Hawthorns for a second stint as boss for the 1981/82 campaign and reunited with the boy he brought to the Club in 1977 to great effect. Regis proved to be instrumental in helping the Baggies go on an impressive run in both of England’s domestic cup competitions.

Albion’s route to the League Cup Semi-Final saw an astonishing three replays fought out with West Ham United and Cyrille was the difference in this tricky run of games, netting in all three matches including the winner in the deciding replay. Two goals at Selhurst Park set the Baggies up for a local derby victory over Aston Villa, but Tottenham Hotspur prevented Regis and his team-mates reaching the final.

BBC’s Goal of the Season award went to Regis that year for his heralded spectacular strike against Norwich City in the fifth round of the FA Cup prior to netting in the 2-0 quarter-final victory over Coventry City to get the Baggies into the last-four.

"I just thought I’d have a go, it had a great strike on it and went in the top left corner so I was very proud of it,” said Regis about his award-winning goal against Norwich.

Again, there was heartache for Regis and Albion as QPR scraped a victory that again shut down the door to the grandstand occasion the team craved in pursuit of the reward their football perhaps deserved.

But Cyrille’s goal-scoring brought him England recognition in February 1982 when he appeared as a second-half substitute for Trevor Francis during England’s 4-0 thumping of Northern Ireland at Wembley.

Cyrille departed in 1984 for Coventry City where he finally gained the major honour he so richly deserved with their FA Cup final triumph in 1987.

Always at home in the Midlands, he went on to play for Aston Villa and Wolverhampton Wanderers after the Sky Blues before finishing his career at Chester City.

Regis coached at The Hawthorns over four seasons and extended his mentoring role when he began working as an agent with a special responsibility for helping young footballers avoid the pitfalls of their career.

It was a role in which Cyrille excelled and which was saluted by The University of Wolverhampton in 2001 when he was presented with an honorary doctorate. Albion’s 125th anniversary gave another example of the esteem and affection reserved for him at The Hawthorns when he was named as one of the Club’s 16 greatest players.

His football and charitable achievements were then saluted in 2008 with an MBE, officially awarded to Regis for his voluntary work and services to football.

The heartbreaking news of Cyrille’s passing in January 2018 shook the footballing world but the code he lived by which helped so many, in addition to providing countless joyous Albion memories will live on in the hearts of football fans far beyond the Midlands.

Last year also saw John Barnes present Cyrille’s wife Julia with an award as they inducted him into The National Football Museum’s Hall of Fame while Julia continues to lead the Cyrille Regis Legacy Trust.